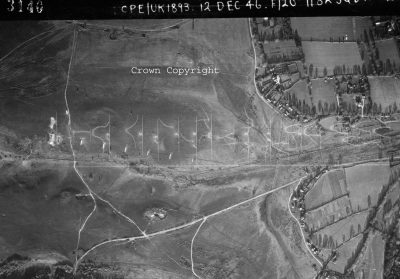 1946 RAF Aerial Image of White Moor. The Range can be located as several earth mounds running generally E-W across the photo. Unfortunately there is some print damge on the surface of the photo. Crown Copyright 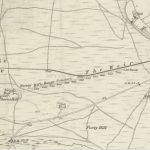 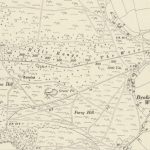 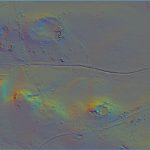 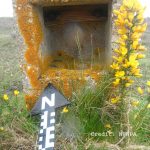 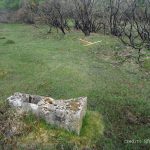 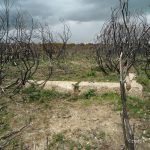 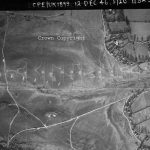 At Brockenhurst a roughly triangular area of plain  that is bordered on the west by the A35, on the north by Rhinefield Road and the south by Wilverley Inclosure and Burley Road is recorded as a large Field Firing Area on the 1943 New Forest Training Area Map.

Further war diary research has indicated that both infantry and armoured units trained here during the war (War Diary 33 Army Tank Brigade) and photographs and videos of tank manoeuvres have also been identified. These can be found on this site: Here and Here.

The Training map also identifies an old rifle range immediately east of the Field Firing Area. This 1,000 rifle range first appears on the 1910 Ordnance Survey map just north of the Weir and supersedes an earlier  range recorded on the 1870 Ordnance Survey map (Image above) that was just south of the Weir. This earlier range was originally set up as one of the three Rifle Volunteer Corps ranges that can be found in the New Forest at Brockenhurst, Burley and Lyndhurst. The Brockenhurst Weirs Rifle Range is marked as disused on the 1898 Ordnance Survey map. It is possible that local geography; boggy ground and hillocks prevented the original range to the south from being extended to reflect the greater firepower of later weaponry.

It is possible to visit some the of the surviving earthworks of the original 1870 range. The Butts mound survives with a scar where the targets have been removed. The mantelet marked on the 1870 range just to the north west of firing off point at 150 yards survives as a small mound and the lidar images of the area show straight ditched trackways running the length of at least 500 yards from the butts to the 500 yard firing off point.

In regards to the WWI and WWII range a rifle butt and several chalk markings are visible on historic WWII aerial photography and modern aerial photography. Visiting the site today reveals numerous earth mounds, concrete signal boxes, the base of the butts and the concrete foundation for the target.

The latest iteration of the range in WWII was set up firing in a westerly direction from distances of 90m, 180m, 270m, 360m, 450m and 540m; a downsize from the 1,000 rifle range. The distances suggest that the range was also used for side arm training.

The 2011 lidar survey image of the area (linked above) has the stream running across the middle of the image, to the north of which you can see the rectangular firing off points of the latest version of the range. Below the stream you can identify the butts for the original range and line of range. You can also see the gravel quarry marked on the historic ordnance survey maps.