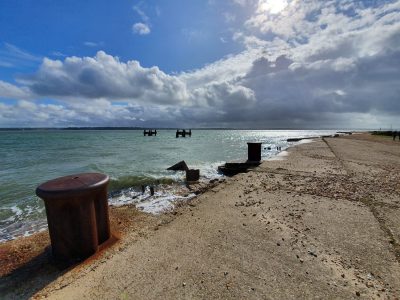 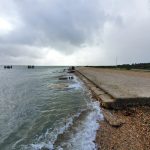 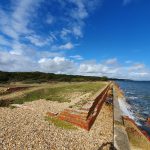 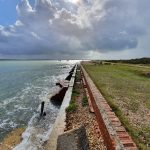 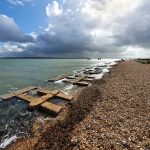 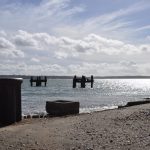 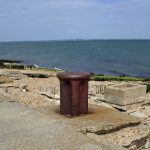 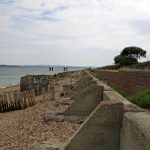 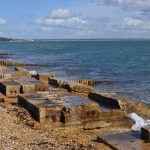 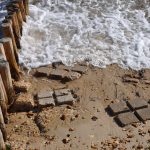 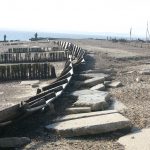 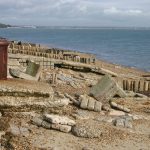 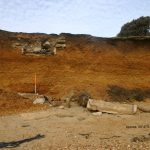 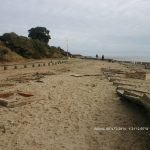 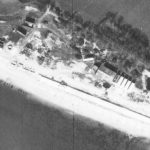 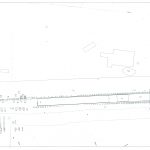 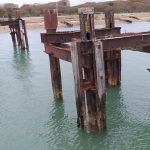 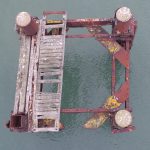 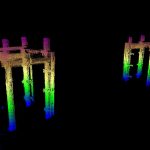 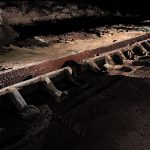 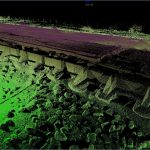 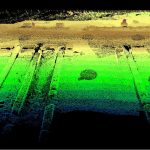 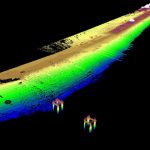 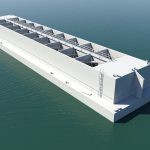 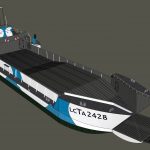 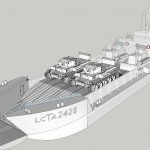 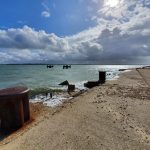 On the 6 June 1944 thousands of troops with their vehicles and supplies left Britain via locations such as Lepe Beach in the New Forest for the beaches of Normandy. This was D Day, the start of the great campaign to liberate Europe and to bring the Second World War to its end.

The D-Day invasion, code named Operation Overlord, is one of the most remarkable feats in military history, it had taken over two years of planning, and was one of the best kept secrets of the war.
During the build up to D Day troops and supplies were marshalled along much of the Hampshire coast. Lepe and the surrounding area came under the control of the shore station HMS Mastodon, the headquarters of which were at Exbury House. Many hundreds of troops with their equipment, vehicles and ammunition were hidden along the narrow roads and in numerous closed camps hidden in the wooded areas across the New Forest.
War diaries tell us that the Embarkation hard at Stanswood (Lepe) Q2 was programmed and commenced in July 1942 and completed by October 1942. This was a second phase of hard construction to expand hards commissioned in early 1942 to support commando operations in Europe. The first phase included Q hard in front of Lepe House. The hards consisted of a concrete access road down to concrete apron at the high water mark with a carpet of interlinked hardening mats on the intertidal beach to create a solid slipway surface at all tide times. It was built to serve two types of assault vessel; Landing Craft Tank (LCTs) or Landing Ship Tank (LST). For D-Day the hards at Lepe were used to embark troops bound for Gold Beach. War diary research says that prior to D-Day, 1579 men and 292 vehicles boarded 40 LCTs at Q2 and for the four weeks after D-Day 6,407 men and 2,037 vehicles boarded 122 LCTs at Q2. This was just one of a whole networks of Embarkation Hards across the south coast showing the huge administrative undertaking involved with D-Day.
Though the Q2 hard was built first in 1942 the focus at Lepe changed to help with the construction of Mulberry Harbour elements. Mulberry would be essential for supplying the army on the beaches of France and allow the allies to launch an attack on the Normandy Beaches rather than the very heavily defended deep water ports. The idea to build a harbour on the south coast and take it with the invasion force was a brilliant feat of engineering and was one of key factors in the success of Overlord. The floating harbours was to be assembled from a variety of component parts manufactured on the south coast. Several construction sites were chosen. The beach at Stanswood Bay being used in the manufacture of six type B2 Phoenix concrete caissons. The floats ‘Beetles’ supporting the roads connecting the harbour to the beach were constructed along the Beaulieu River and at Marchwood. Many of these sites still retain some of the archaeology associated with the Mulberry project today.
We don’t know when the Mulberry Harbour construction and launching site was constructed at Lepe, but it would likely have been late 1943. Six B2 Phoenix Caissons were simultaneously part built on these platforms from January 1944 so that they could be directly launched into the sea by May 1944. Then towed up Southampton Water to be finished.

Today at Lepe you can still see plenty of evidence of wartime activity. If you walk along the beach or track, about half a mile east of the car parks you will come across the extensive concrete and brick structures were used for three different tasks: construction of the ‘Mulberry Harbours’ (caissons), caisson launching, and for embarkation of men, vehicles and supplies. The following aerial footage and 3D model shows the site as it can be found today.

A birds eye view of the extensive features that were designed and built to support Mulberry and D-Day at Lepe.

3D Model of Lepe Today that you can explore

The physical surviving remains Include:

Royal Commission on the Historical Monuments of England Survey 1990

Following severe storms in early 1990 the RCHME were requested to survey the site due to concerns about the weakened structure becoming vulnerable to undermining by tides and coastal underflow. There was real danger that another severe storm would further damage one of the few surviving and best preserved monuments to a major event in recent British military history. The aim of the RCHME survey was to record in detail the full extent and form of all remains associated with the D-Day operations surviving within the area.

A low resolution of the survey map can be found in the images above and You can access an annotated copy of the RCHME report of this survey here: RCHME 1990 Survey

It was hoped that following the survey engineering work could be carried out to stabilise the monument and protect it from further damage. However, this was not to be the case and at some point after the survey the three most eastly Caisson construction platforms were deliberately broken up and left to act as coastal defence for the surviving platforms.

More recently with the support of funding from the Our Past, Our Future a National Lottery Heritage Funded Landscape Partnership Scheme a number of additional projects and surveys have been undertaken.

During 2018 the Channel Coastal Observatory based at the National Oceanographic Centre in Southampton and New Forest District Council undertook detailed laser scanning of the foreshore at Lepe Country Park. This was part of a regional project to survey and record coastal defence which includes the WWII archaeology on the coast at Lepe. This data capture however will allow us to monitor the site going forward and will also allow the creation of digital models for education, interpretation and modelling the history of the area. The results of that survey have been used to create the 3D model of WWII Lepe above as it can be found today. You can read more about the recording work here: Lepe Laser Scanning

Using the laser scan data collected during the 2018 survey as well as the drone footage captured by the New Forest NPA and another survey undertaken by CITiZAN (CITiZAN Drone work can be found: here) we used funding from National Lottery Heritage Fund via the Our Past, Our Future Landscape Partnership Scheme to commission Wessex Archaeology to re-construct Stanswood Bay (Lepe) as it would have been seen in May 1944. At this point two of the six caissons have been launched following partial construction and side launching and then towed up Southampton Water to be finished. Once the Caissons were launched attention turned back to the hard for the final build up to D-Day.

Lepe D-Day Site May, 1944
Modelled by: Wessex Archaeology
on Sketchfab

The annotations provide more detail on the Caisson construction and launching process. We will be seeking to add more information and detail to this model. Please get in touch if you are aware of any photos or memories of this important New Forest WWII site. There are no known contemporary photos of the site in use. This model is based on archaeological recording, contemporary war diaries and plans, memories, oral histories, loading tables, known examples from elsewhere and some later aerial photos.

If you have more information on D-Day in the New Forest or memories of the closed camps or embarkation please share them with us on this site.

(The following information was passed on to us from R. Reeves via Lepe Country Park)
Lepe (recorded as Stanswood in the loading orders) was used for loading the heavy equipment, i.e. tanks, trucks and stores, for the assault on Gold Beach the assault force being named as ‘Force G’ which was based around the 50th ‘Northumbrian’ Infantry Division. (The insignia of the 50th Division shows the letters TT in red on a black backgrounfd and stands for Tyne & Tees.) To this was added all the armour and assault troops.  Troops listed in the loading were as follows:

231 & 69 Brigades were the assault brigades for Gold Beach landing on Jig and King Sectors respectively
D-3 – Self Propelled Artillery, 231 Brigade

D-1 – Army Fire Service. We do not know what his was composed of.

The storm that arrived late on Friday evening (14 February 2014) exposed a couple of small brick structures in the beach front car park. Further erosion along the coast caused a possible gun emplacement to start to collapse on to the beach.