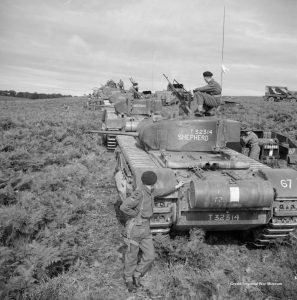 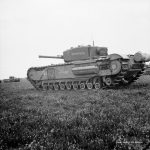 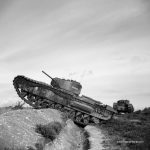 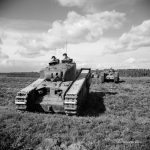 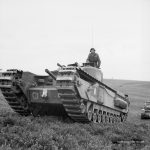 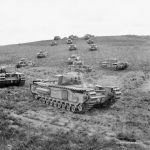 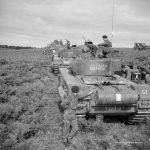 The photos show Churchill Mk I Tanks with hull-mounted 3-inch guns. The units involved were 43 RTR, 144 RAC & 148 RAC all part of the 33rd Army Tank Brigade attached to the 3rd Infantry Division. It was noted that even though they were very heavy they could move at speed across any terrain including any New Forest obstacles.

We now know more information about this event following research in the War Diaries held in the National Archives; mentions of the days parading can be found in 3 different diary entries with differing levels of information.

This was obviously an important event as there is an additional set of colour photos: Colour Photos of the 43rd Battalion, Royal Tank Regiment, 33rd Brigade on exercise in the New Forest.

Along with a film piece available through British Pathe