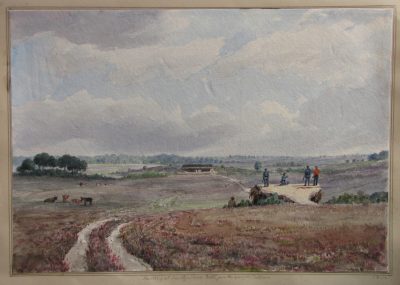 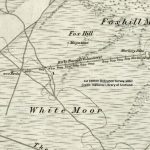 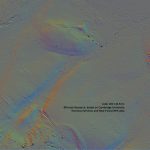 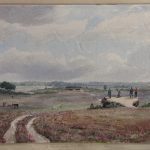 Historic Ordnance Survey maps from the second half of the 19th century show a number of rifle ranges scattered about the New Forest. It is still possible to see visible traces of these ranges surviving at Long Bottom, Lyndhurst, Burley and Brockenhurst. A number of the ranges were then adapted or changed for potential WWI and then WWII use.

At White Moor you can still see the faint mounds from the firing off points, the blast banks of a magazine to the north of the range, various mounds associated with the markers huts and the earth mounds of the target butts. The 2011 Lidar image shows these arranged across White Moor.

The range at White Moor had numerous firing off points at either 100 or 50 yard intervals, slightly dictated by the landscape.

The New Forest centre hold an image of the range painted by Sir Charles Burrard  in 1861. The view looks from the 900 yard firing off point towards the target butts.

In early 1859, it was generally believed that the Emperor Napoleon III of France had ambitions to dominate Europe, as his uncle had fifty years before; and among other moves was planning to invade Southern England and the fear was that Hampshire would be on the front line. There was a fear that, if the Royal Navy was unable to prevent a French landing, the Regular Army with a large proportion of its strength in India and on colonial service would be too small to repel the invaders.

Lord Palmerston, the Prime Minister, ordered the strengthening of a number of south coast defences including Hurst and Calshot Castle in the 1850s.

At the same time the government was urged to re-form the Volunteer forces, which had been raised previously between 1793 and 1813, but had then been largely disbanded, and the formation of a Volunteer Rifle Force was subsequently agreed.

Each local Corps was intended to be independent and meet its own expenses for uniform, drill hall, drill sergeants, rifle range etc. The government would, however, supply Long Enfield muzzle loading rifles and make grants based on attendance and standard of marksmanship.

The Volunteers were not initially intended as front line soldiers. The emphasis was on proficient marksmanship with the rifle. Volunteer sharpshooters would operate in small units and their intimate knowledge of their districts would make their most effective role in operating on the flanks and communications of the enemy. Drill was therefore kept to a minimum and uniform was as simple as possible.

In December 1861, the 1st Administrative Battalion Hants Rifle Volunteers was created to establish uniformity in training among the six independent companies that had come into being in the Winchester area. Apart from his weekly local training a Volunteer was expected to attend eight official exercises each four months under regular Army instructors.

The role of the Volunteers was gradually brought closer-to that of the Regular Army. In 1880 the 1st Administrative Battalion was consolidated with the 1st Hampshire Rifle Volunteer Corps, in which the individual Companies lost their independent status and became lettered Companies.

Eventually, in 1908, the citizen army of the Rifle Volunteers, which had expanded greatly during the Boer War, was absorbed, along with the County Militia, into the Territorial Forces (renamed Territorial Army in 1921). The 1st Hants provided the 4th Battalion the Hampshire Regiment, which was organised, equipped and trained on Regular Army lines and was intended in the event of war to relieve one of the regular Battalions which would then be available to fight in France.

This short clip provides a bit more history about some of the Napoleonic rifle ranges that can be found across the New Forest.