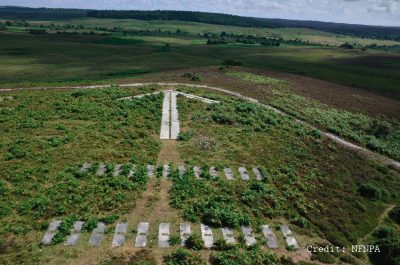 Illuminated direction arrow pointing towards the illuminated target in the valley. The arrow would have been lit by a diesel generator. Photo taken August 2013 Credit: NFNPA 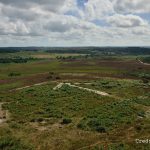 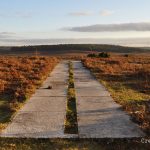 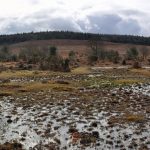 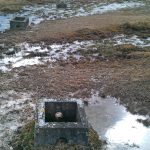 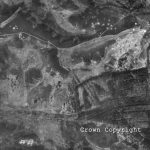 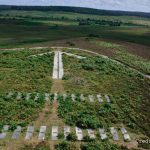 The government first suggested the compulsory acquisition of land for bombing practice at Ashley Walk in November 1939 and the lease was agreed with the Verderers in February 1940. The range was ready to use by August 1940. German Reconnaissance photos from 1941 show some of the range features in place, but many of the special targets yet to be added.

Ashley Walk bombing range was used by aircraft flying from the Aeroplane & Armament Experimental Establishment (A&AEE) at RAF Boscombe Down. The range consisted of several different targets (for bombing, ground attack, mock ship targets, aircraft pens and the Ministry of Home Security target) as well as domestic facilities for crew, two small grass airstrips, observation shelters and towers.
These photos are from the high level day and night bombing range. Known as the illuminated target as the direction arrow and the target could be illuminated by a diesel generator.

The whole range was used extensively throughout the war, creating many bomb craters and even an aircraft crash site. Activities continued until 1946, but the range was not cleared until 1948. The vast majority of targets and facilities were removed, although various features such as the concrete illuminated target and the various chalk marks still survive. The Ministry of Home Security target was covered over with an earth mound and remains visible today near to one of the surviving observation shelters. Some craters were filled, but many were left open.

Do you have any more information or photos of Ashley Walk Bombing Range, please share them with us.