The Ministry of Home Security Target as it stands today December 2012. The earth mounds contains a large concrete structure 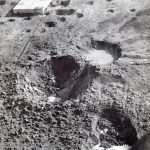 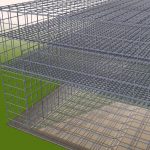 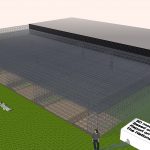 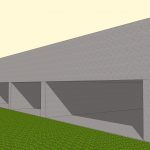 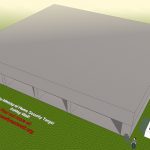 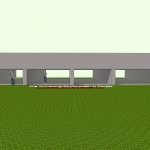 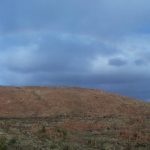 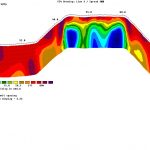 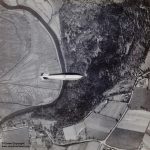 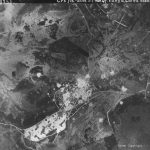 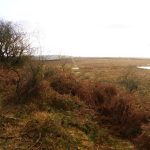 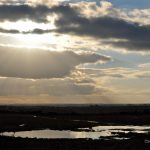 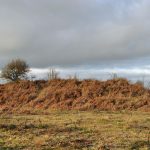 As you walk along Hampton Ridge you may notice numerous earthworks and occasional concrete remains hinting at some of the area’s history. One of the most prominent features is a huge earthwork that looks like a large round barrow. This is the site of the Ministry of Home Security Target, known locally as the ‘Sub Pens’, once part of the old WWII Ashley Walk Bombing Range that once covered most of the landscape in this area of the New Forest.

This earthen mound covers a large re-enforced concrete structure built around 1942 and measuring 79ft by 70ft and 12ft high on a heavy duty foundation pad and at a cost of £250,000. After the war and when the range closed the structure was buried following failed attempts to demolish it. If you walk to the top of the mound you will notice a flat top and concrete edges beginning to show where soil has eroded.

The site is locally referred to as the ‘Submarine Pens’. We believe this name arose during the testing of the Grand Slam bomb as those involved in the trails were told that the target was built to replicate the German Submarine Pens built along the French Coast, one of the main targets for the bomb.

Research in the War Diaries and papers held at the National Archives has revealed that the target was built by the Ministry of Home Security to test various concrete mixes, steel re-enforcement and to test potential public air raid shelter designs. The document reference DSIR 27/29/ARP315, Construction of a R.C. shelter at Ashley Walk. The control of concrete quality. By A.R. Collins.

Following a large amount of personal research Henry Cole has pieced together the story of this target and the site that dominates the old Ashley Walk Bombing Range.  The pdf can be accessed here

Geophysical Analysis:
The project team working with Wessex Archaeology and English Heritage have conducted some further investigation in to the ‘Ministry of Home Security Target’ using various non-intrusive and non-destructive geophysical techniques including; Electrical Resistivity Tomography, Ground Penetrating Radar, Magnetic Survey and Earth Resistivity Survey. Due to the construction methods used to build the target these techniques are being tested to see what results they return and how they support or further our knowledge gained through archive research. You can read the final results: here

Once we have built up a picture on how the different techniques behave we can then look to use them on several underground sites the project has identified where less additional information is known and little has revealed itself through archive research.

The Ashley Walk area is a SSSI (Sites of Special Scientific Interest) and it is illegal to conduct excavations without proper permissions.  There has however been some ‘night digging’ into the mound and whilst the survey team were on site an unmarked envelope was found one morning. In it were a number of photos showing the inside of part of the structure taken from this excavated pit.  You can see these photos by following this link to the Forestry Commission’s Volunteer Rangers Website.

If you have any old photos or stories of the target or any from Ashley Walk please let us know or share them with us on this Portal.