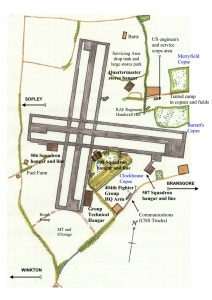 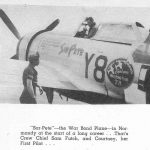 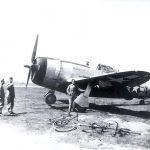 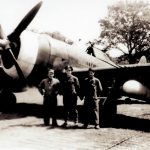 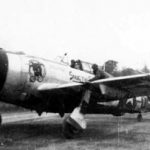 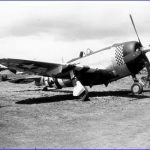 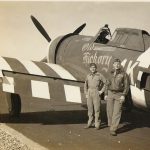 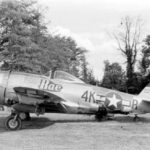 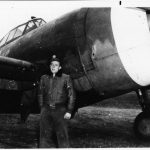 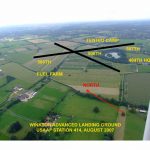 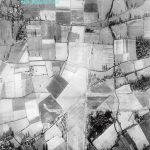 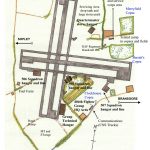 In late 1942 farmers of the land between Sopley, Winkton and Bransgore were visited by reconnaissance surveyors of the Air Ministry. Land from Sopley Farm, Parsonage Farm, and both lower and upper or higher Clockhouse Farms would be lost to the war effort. In the summer of 1943 4768 Flight of 5004 Airfield Construction Squadron RAF arrived to prepare the land to accommodate an advanced landing ground. The airfield was ready for September 1943. In January an advance party arrived from the United States Army’s Ninth Airforce to prepare the facilities required for the 1000 Airmen and seventy-five P-47 Thunderbolt aircraft of the 404th Fighter Group. The party included American Airfield Engineers and Ninth Airforce Service Corps personnel. The engineers reinforced the two mile-long runways with pieced steel planking and the corners of intersections between taxiways with tar reinforced burlap. The Service Corps constructed the camp facilities. The airfield was known to the USAAF as Station 414.

In early April 1944 the 404th Fighter Group personnel arrived from Christchurch railway station by truck and by mid-April their aircraft had started to arrive. Following intensive training and preparation the 404th went operational on May 1st. The three squadrons in the Group (506th, 507th and 508th Fighter Squadron) flew dive bombing, armed reconnaissance and escort missions over occupied Europe. On D Day 6th of June the whole group flew four beach protection patrols over the invasion fleet and beaches, the first at dawn, the last in the late evening. The 404th continued to fly an intensive programme of operations from Winkton until early July 1944 when they moved to Normandy. Winkton airfield closed and was returned to agriculture in August 1944.

For more on Winkton ALG and the 404th in England see www.winkton.net

It seems that some required fields are empty or you have not agreed on licence
LOCATIONS:
Winkton
PERIODS:
Modern
SUBJECTS:
Aerial
D-Day
Maps and Plans
Military
WWII
DATA SOURCE:
Contributions
New Forest Remembers