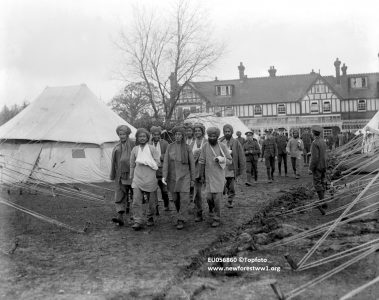 During WWI troops letters home would first go past the eyes of the censors to make sure no secret information was divulged. But other topics in these letters also found themselves being removed including details of the poor conditions, low moral etc.

Some of the letters from the Commonwealth troops added some additional challenges to the censors. Indian troops wrote in Hindi, Urdu or Punjabi and once the troops discovered their letters were being read by the censor they even wrote in code, “Black Pepper” and “White Pepper” referring to the Indian and British troops.

Held by the British Library are rafts of documents from this time including a collection of digitized copies, available to view online of the  “Reports of the Censor of Indian Mails in France”, these covering from 1814 to 1918 and include the censored sections of Indian letters home, to and from England and to other troops serving in the trenches.

Project volunteers are now working through thousands of pages of these monthly reports for any references to the New Forest and the surrounding area.

Here is one of the first items found:

Page: f.2v, f.3r
“From _ a non-commissioned officer of the 47th Sikhs to _ Sirdar Bahadur & E.A.C. at Amritsar. (Original in Urdu). —–“If it be the will of God I shall some day tell you the whole story. In the mean time I write thus much. On 28th October in the evening, while in the act of charging, I was wounded by the enemy’s machine gun. My company suffered heavy loss & inflicted the same upon the enemy, many of whom were taken prisoner & many killed. Before this too we had had heavy fighting & our troops had proved fidelity to Government, so that our renown was very great.  Well, when I was wounded I came to England & many men of the Indian troops have come to England. Now I am all right again.  My wound healed very quickly. The fighting is still going on just the same.  I hope we shall soon be victorious. _____  So you are all well & happy. But our brothers who are in the trenches have endured sufferings beyond the power of words to describe.  When God grants me to see you again, I will tell you the whole story. I think you will not believe what I tell you ____ of the fighting of our ships & of our fights with the bayonet. I have seen such sights that my wits are still amazed. You generally read the newspapers, but I put very little faith in what is told in the papers. ____ The hospital in which I am was formerly a big hotel.” (Continues of page f.3r)
“The arrangements are excellent, & I am absolutely comfortable in every way.
At first I was at Brockenhurst which was near Mr Lieut. — Governor Dane’s house.  He used to come to see us, & the King & Queen came.  Lord Curzon came too & other officers to high estate come & they look after us very well.”

It is possible that this NCO was staying in either the Balmer Lawns or Forest Park Hotels as these were both commandeered and fitted out as  medical facilities as part of the Lady Hardinge Hospital for Wounded Indian Soldiers. Later for the New Zealand troop’s one was used for officer the other NCOs with all lower ranks being in the main hospital or other locations.

This is just the start of the research into these papers and this page will be updated with any further findings as the research continues.