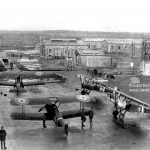 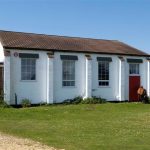 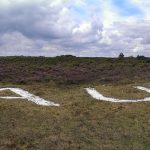 To the north of the B3054 lies the remains of the WWII airfield of RAF Beaulieu, but to the south you can still find evidence of a WWI aerodrome at East Boldre, the original RAF Beaulieu.

On Sunday 1 May, 1910, a large crowd of people came to East Boldre to watch a flying display by William McArdle and J. Armstrong-Drexel, who were flying two Bleriot monoplanes.

Despite refusal from the Office of Woods, they had built two sheds, one for a hangar and one for a workshop, and they hired some local lads to clear a strip of heathland for the runway; creating the second flying school to be opened in the UK, (the first being at Leysdown on the Isle of Sheppey). There a some photographs in circulation from this period of the early planes resting on local chimney stacks.

The flying school closed two years later in 1912 and the airfield reverted to quiet grazing land but in 1914, one of the sheds on the airfield was taken over by the Royal Flying Corps (forerunner of the RAF). By 1915 the demand for pilots on the Western Front was so great that the training school, called RFC Beaulieu was built on the area. Three iron hangars, several huts and the Officer’s Mess (which is now the village hall), were built in the village during 1915. By 1917, four more large hangars, a powerhouse, workshops and accommodation for airmen, airwomen and officers were built on the Beaulieu to Lymington road. Three squadrons were formed at RFC Beaulieu before being moved to France. 84 Squadron still exists and still considers itself to be a Beaulieu Squadron.

Few photographs are in circulation of the WWI airfield. However a recent donations to the East Boldre Village Hall Society of WWI period photos shed new light on this airbase. You can read more about the history of the Flying school and RFC Beaulieu in the Local History section of the East Boldre website.

Two new collections that can be seen on New Forest Knowledge:

Alongside the officer’s mess which survives as the East Boldre Village Hall you can also find other echoes of the areas flying past including the: Beaulieu Letters