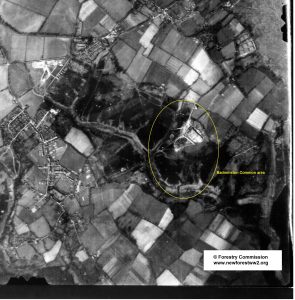 Seen on historic aerial photographs to the north north east of the Badminston Common was: “A large turf-covered subrectangular structure surrounded by an earthwork perimeter bank, together with associated buildings” (NMP data). This site was once the location of buried storage tanks of fuel for PLUTO (Pipe Line Under The Ocean). The site was also surrounded by anti-aircraft gun positions.

Still surviving today is a brick building immediately west of the site at the end of that lane – it was part of the site possibly a Radio building.

Operation Pluto (Pipe-Lines Under The Ocean) was a secret operation by British engineers, oil companies and armed forces to construct an undersea oil pipelines under the English Channel between England and France to supply much needed fuel and remove the dependency on oil tankers. The scheme was developed by Arthur Hartley, chief engineer with the Anglo-Iranian Oil Company.

Geoffrey Lloyd, the Minister for Petroleum, met Admiral Mountbatten, Chief of Combined Operations, in 1942 and then the Chairman of Anglo-Iranian. The operation was approved with the first line to France being laid on 12 August 1944 after successful trials.

The pipes pass through this location on its way to Lepe Country Park where it then travels under the Solent to the Isle of Wight and on to Shanklin Chine before crossing the English Channel on to France.

Find out more from the orginal British Pathe website: Here

Find out more from the orginal British Pathe website: Here