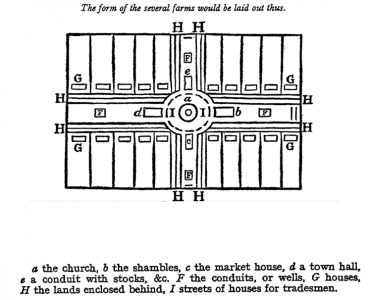 Defoe's Model Township
The form of the several farms would be laid out thus. 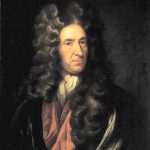 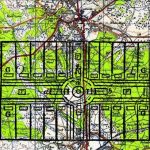 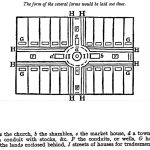 In 1709 Britain experienced an influx of about 13,000 refugees, known as the poor Palatines, from Germany. They were largely protestant, fleeing from aggression by the catholic Louis XIV of France. Mainly these people hoped to continue their journey to America where other German refugees had found new homes in previous years.

The Whig party which controlled parliament at that time was of the opinion that an increase in population would help develop the economic wealth of the nation, while the Tory party was concerned that the number of these immigrants who were largely poor would lead to instability.

Daniel Defoe, who was a leading radical thinker of the time, suggested that an area of the New Forest near Lyndhurst be set aside to create a model township for the refugees. Twenty honest and industrious men capable in husbandry would be identified and given 200 acres each. Known as farmers, these men  would be given money to stock their farms and live rent and tax free for twenty years. Through the wealth they generated from their farming they would pay for the whole infrastructure of the town, including doctors, ministers of religion, carpenters, builders, a miller and other labourers: inn-keeping was expected to be a part-time occupation. In total Defoe expected that this scheme would support some six or seven hundred people. After twenty years when the town was established the residents would start to pay taxes.

Ultimately Defoe expected there to be about 20 such schemes built across the country.

Defoe’s sketch map shows the layout of the township, with the central crossroad housing the necessary infrastructure for the establishment of a flourishing community. He expected that common land would be available outside the perimeter to allow the tradespeople to keep a few cattle or sheep to help eke out their existence. The twenty farms are marked out, although the farm buildings are probably not to scale.

Nowadays few of us have an easy understanding of what 200 acres means. Far less do we understand the concept of 40,000 acres, not to mention the extent of land required for the Town Hall, church, labourers’ cottages and other pieces of infrastructure.

The map shows the extent of land that Defoe’s township would have covered if it were planted half way between Lyndhurst and Brockenhurst.

Defoe made an assumption that the soil of the new Forest was of sufficient quality to make his scheme work. In fact the reason for the New Forest’s survival as a wilderness is that the ground is generally of little agricultural merit.

Defoe’s, 1962, A Tour through the whole Island of Great Britain Vol-1 can be read online: