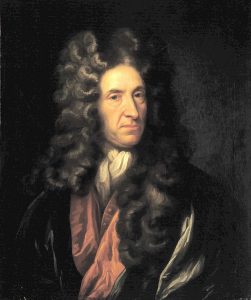 Daniel Defoe is best known, as the author of Robinson Crusoe (1719) but was also famous as a political pampleteer, and is often called the father of modern journalism. He was born as Daniel Foe in 1660, the son of a butcher in Stoke Newington in London, but used the grander-sounding ‘Defoe’ as his pen name. He was arrested, pilloried and imprisoned in 1703 for a pamphlet he wrote satirising high church Tories. He later wrote pamphlets for both the Tories and the Whigs. His novels also included Captain Singleton (1720) and Moll Flanders (1722). His three volume travel book, Tour Through the Whole Island of Great Britain was published between 1724 and 1727, and was innovative partly because Defoe had actually visited the places he described and observed the places through the colourful background as a soldier, businessman, and spy. ‘A tour’ after Robinson Crusoe became his most popular and financially successful work during the eighteenth century. Defoe died in 1731.

‘A Tour’ is roughly divided into several tours, or circuits, around Britain. Volume 1 contains three letters. The first two, Through Essex, Colchester, Harwich, Suffolk, Norfolk, and Cambridgeshire, and through Kent Coast, Maidstone, Canterbury, Sussex, Hampshire, and Surrey, are complete circuits, both beginning and ending in London.

…one of the best wooded counties in Britain; for the river on the west side of the town in particular comes by the edge of the great forest, call’d New-Forest; here we saw a prodigious quantity of timber, of an uncommon size, vastly large, lying on the shoar of the river, for above two miles in length, which they told us was brought thither from the forest, and left there to be fetch’d by the builders at Portsmouth-Dock, as they had occasion for it.

….and as I rode through New-Forest, I cou’d see the antient oaks of many hundred years standing, perishing with their wither’d tops advanced up in the air, and grown white with age, and that could never yet get the favour to be cut down, and made serviceable to their country.

You can read the full transcript online at Vision of Britain.

It seems that some required fields are empty or you have not agreed on licence
PERIODS:
Modern
SUBJECTS:
Archives and Libraries
Forestry
History
Maritime
Report
PEOPLE:
Defoe, Daniel
DATA SOURCE:
Contributions