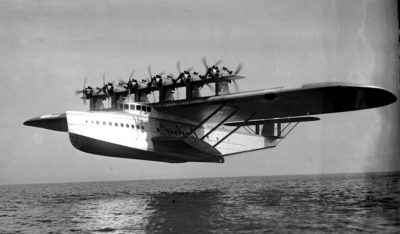 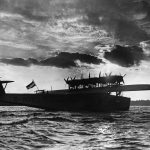 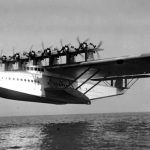 The Dornier Do X was the largest, heaviest, and most powerful flying boat in the world when it was produced by the Dornier company of Germany in 1929. First conceived by Dr. Claude Dornier in 1924, planning started in late 1925 and after over 240,000 work-hours it was completed in June 1929. The Flugschiff (“flying ship”), as it was called, was launched for its first test flight on 12 July 1929.

The Do X was financed by the German Transport Ministry and in order to circumvent conditions of the Treaty of Versailles, which forbade any aircraft exceeding set speed and range limits to be built by Germany after World War I, a specially designed plant was built at Altenrhein, on the Swiss portion of Lake Constance.

The type was popular with the public, but a lack of commercial interest and a number of non-fatal accidents prevented more than three examples from being built. The popularity can be seen by the 14 plus clips of the flying boat available on British Pathe.

To introduce the airliner to the potential United States market the Do X took off from Friedrichshafen, Germany on 3 November 1930, under the command of Friedrich Christiansen for a transatlantic test flight to New York. The route took the Do X to the Netherlands, Calshot in England, France, Spain, and Portugal before heading down the west coast of Africa before heading to Cape Verde Islands across to Brazil and then north via San Juan to New York. The journey ended up taking 9 months due to various issues and mishaps.

British Pathe has two short clips of the Do X leaving Germany and arriving at Calshot and whilst at Calshot a visit by the Prince Edward, Prince of Wales (later King Edward VIII, Duke of Windsor) and an interview with Dr Dornier.

The Do.X flies overhead accompanied by other planes. It comes in to land on the waters. People are watching from the dockside. Shots of the Dornier moving across the water. Shots from a boat going round the plane. Shots of various dignitaries going onboard the Do.X and meeting crew.

FILM ID: 753.02 “Calshot. The Prince pilots the DO-X. His Royal Highness flies from and to London to take sole control during half an hour’s flight in world’s largest flying boat.”

A motor launch draws up alongside the German Dornier DO.X flying boat. LS Prince Edward, Prince of Wales (later King Edward VIII, Duke of Windsor) is greeted as he climbs from the boat onto the plane.

Various shots of the DOX taking off from water. The plane flies around above the water. Interview with a man introduced as Dr Dornier. He talks about the DO X and how proud they are that the Prince has paid them this visit.