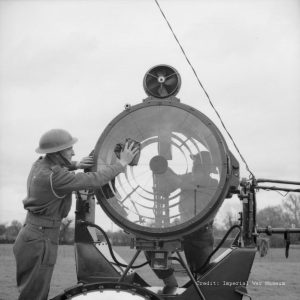 Cleaning a typical searchlight setup for illustrative purposes only. These photos are not from the New Forest. We aim to replace them with location specific photos when they are uncovered. Credit: Imperial War Museum H10006
Author: NFNPA Archaeology

Episode 1 – The Forest in the War

This is the first of a series of three Podcasts for the New Forest Remembers World War II Project. All Material Copyright New Forest National Parks Authority.