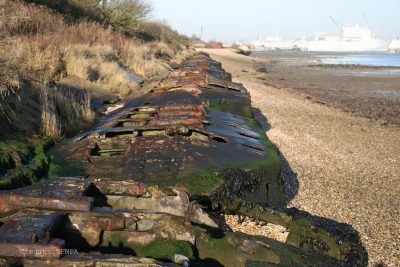 Surviving 'Beetle' elements of Mulberry Harbour along the foreshore between Hythe and Marchwood. (Photo taken May 2011) 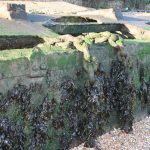 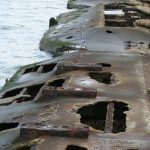 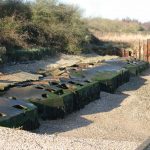 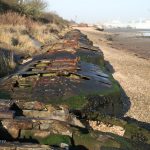 During the planning for the assault phase of the invasion of Europe (D Day), it became clear that the early use of a major port (or preferably ports) would be crucial to ensure the reliable supply of troops and materiel critical to making the invasion a success.  This presented a number of challenges, among which were the likely heavy casualty rates in attacking a port directly (as demonstrated at Dieppe in 1942), and the risk that the port would be rendered inoperable before capture by enemy action or the attack itself.  It was therefore decided that two artificial harbours (codenamed ‘Mulberry’) would be constructed and then towed across the English Channel to Normandy, almost literally in the wake of the invading forces, to be assembled at beaches Omaha and Gold.

The Mulberry Harbours consisted of a number of elements, each of which was crucial to the functioning of the whole.  These can be broadly categorised into two groups:

Elements of these Mulberry Harbours were built at various points along the New Forest coast; at Stone Point (Lepe), along the Beaulieu River and at Marchwood Military Port including Whales and Beetles.

39 Beetles constructed at Marchwood Military Port still survive today and lie along the foreshore between Hythe and Marchwood. These units were surplus to requirement and were not towed over to the Normanday Beaches, but were recycled firstly as breakwaters and then as coastal defence to protect reclamation areas.