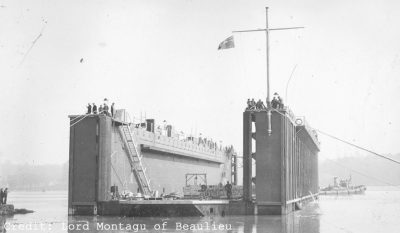 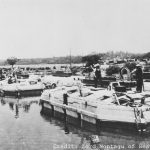 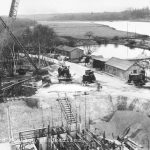 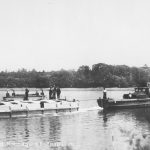 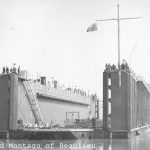 The Beaulieu River, Marchwood and nearby Lepe played very important roles in the construction of temporary Mulberry Harbours, which consisted of ‘Spuds’ (pier heads), ‘Whales’ (roads) and ‘Beetles’ (pontoons). These experimental units were towed across the English Channel to successfully disembark troops, machinery and supplies on the Normandy beaches circumnavigating the heavily defended French harbours.

The actual proposer of the idea of the Mulberry harbour is disputed, and there is also suggestion that the code name came about following a meeting at HMS Mastadon (Exbury House) underneath a Mulberry Tree.

At a meeting following the Dieppe Raid, Vice-Admiral John Hughes-Hallett declared that if a port could not be captured, then one should be taken across the Channel. The concept of Mulberry harbours began to take shape when Hughes-Hallett moved to be Naval Chief of Staff to the Overlord planners.

A trial of the three eventual competing designs for the cargo handling jetties was set up, with tests of deployment at Garlieston, Wigtownshire. The designs were by Hugh Iorys Hughes who developed his “Hippo” piers and “Crocodile” bridge units on the Conwy Morfa, using 1,000 men to build the trial version; the Hamilton “Swiss Roll” which consisted of a floating roadway made of waterproofed canvas stiffened with slats and tensioned by cables; and a system of flexible bridging units supported on floating pontoons designed by Major Allan Beckett, Royal Engineers. The tests revealed various problems (the “Swiss Roll” would only take a maximum of a 7 ton truck in the Atlantic swell). However the final choice of design was determined by a storm during which the “Swiss Roll” was washed away and the “Hippos” were undermined while Beckett’s floating roadway (subsequently codenamed ‘Whale’) survived undamaged. Beckett’s design was adopted and 10 miles of Whale roadway were manufactured.

The proposed harbours called for many huge caissons of various sorts to build breakwaters and piers and connecting structures to provide the roadways. The caissons were built at a number of locations, mainly existing ship building facilities or large beaches. On completion they were towed across the English Channel by tug to the Normandy coast

“Mulberry” and the names of all the beaches were words appearing in the Daily Telegraph crossword puzzle in the month prior to the invasion. The crossword compilers, Melville Jones and Leonard Dawe were questioned by MI5 who determined the appearance of the words was innocent, but after the turn of the century, a former student identified that Dawe frequently requested words from his students, many of whom were children in the same area as US military personnel

All Photos are credit: Lord Montagu of Beaulieu

Do you have any more information such as photos or memories of the build up to D-Day in the New Forest?