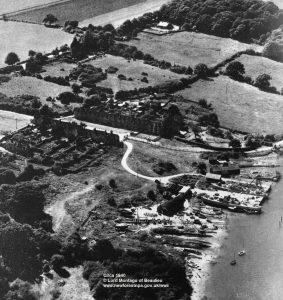 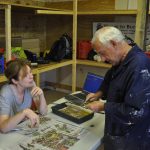 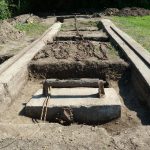 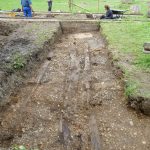 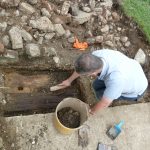 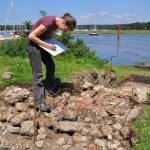 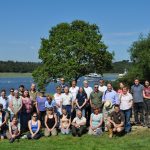 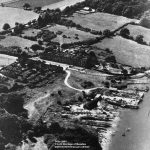 For the Festival of British Archaeology in 2012 the project commissioned an excavation at Buckler’s Hard. Here you can see photos of the excavation, the volunteers that took part and download the archaeological evaluation report.

Report Summery
Wessex Archaeology was commissioned by the New Forest National Park Authority (NFNPA) to undertake an archaeological excavation adjacent to the riverfront at Buckler’s Hard, Beaulieu, Hampshire (NGR 441000 100100). This evaluation formed part of the Festival of British Archaeology 2012 as well as being part of the New Forest National Park New Forest Remembers – Untold Stories of World War II project. It was also hoped that the project could act as an evaluation for a proposed replica shipwright’s workshop.

In addition to the initial three trenches outlined in the Written Scheme of Investigation, two further test pits and five other excavation areas were opened up in order to target better the proposed building footprint and to assess and investigate the concrete slipway. In the area to the west of the slipway the evaluation was able to demonstrate that substantial levelling and landscaping had taken place post-war, and the majority of the structures have been comprehensively demolished. While the depth of archaeology in Trench 1 and Test Pit 5 was shown to be relatively shallow, a much greater depth of stratigraphy was seen in Trench 2 which lay between them. This could suggest a large cut feature or channel was previously situated in this area.

The earliest confirmed activity was a possible jetty 114 in Trench 1, though this stratigraphically pre-dated the concrete hard-standing it could not be securely dated. The slipway itself was seen to be in generally good condition though some of the concrete has been damaged, particularity by root action.

The WWII slipway still exits to a length of over 65m with a 1950’s extension giving it an overall length of over 73m. There is a contrast in working height of the slipway between the upper end and the lower end where a traditional greaseway was set between the rails. Contemporary photographs taken of the Site in the post-war period would seem to indicate that the area to the east of the slipway was also used with a number of timbers visible, the timber seen in Trench 3 may relate to this activity.