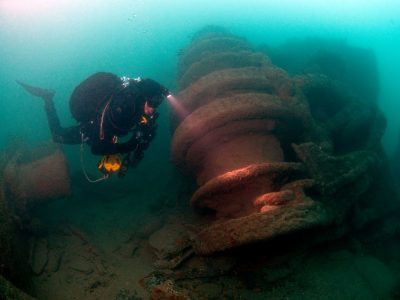 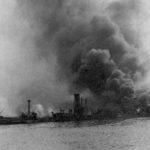 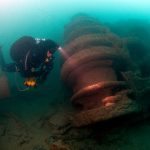 On the 24th March 1918 when on route from New York to Britain with supplies she collided with the SS O. B. Jennings off St. Catherines head and then hit a mine. She was beached in Freshwater Bay and declared total loss.

SS War Knight was without doubt the most famous Island wreck of World War I. On 24 March, 1918 early in the morning travelling in a convoy without lights due to U boat fears she collided with the American tanker OB Jennings who was carrying a cargo of naphtha, the resulting fire killed a large number of crew.

Two destroyers towed them to the Island. The OB Jennings burning for 10 days in Sandown Bay before being torpedoed. She was re-floated and repaired, only to hit a mine in the Atlantic shortly afterwards.

However the War Knight struck a mine outside Watcombe Bay whilst under tow, and was then sunk by gunfire to remove potential hazards to other ships. The fire finally stopped, but her cargo of bacon, oil, rubber, lard and flour was spilt into the sea. Since rationing was in force the people of Freshwater considered this a gigantic stroke of luck, and soon carried crates of the remains away. Thirty-eight people were later arrested; the train which took them to Newport was nicknamed the ‘Bacon And Lard Special’.

You can read more about the SS War Knight’s story on the Maritime Archaeology Trust’s Forgotten Wrecks of the First World War website including information on the crew. This also includes the opportunity to take a virtual tour of the very dispersed wreck site.