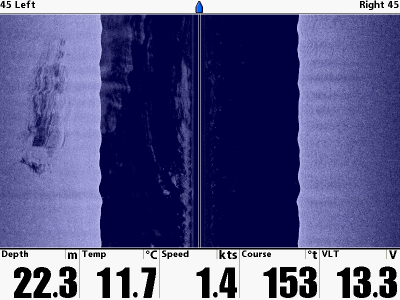 During the 19th century, schooners – sailing ships with two or masts, the foremast typically being smaller than the mainmast – were a very common sight in coastal waters. Able to navigate narrow and shallow creeks and estuaries, they proved invaluable in delivering cargoes to a wide variety of ports.

One such schooner was the Dutch vessel Fenna, the wreck of which lies beneath this marker buoy. The Fenna was a 2 masted schooner of 172 tons, constructed of timber in Hoogezand, near Groningen, The Netherlands, in 1863. From 1870 she had been in the charge of captain J Mulder.

In early March 1881, the Fenna was berthed at Amsterdam, where she took on a general cargo comprising bar iron, iron in barrels and sheet glass in cases, 230 tons in all. She departed Amsterdam with a crew of 5 hands all told and commenced her voyage for Messina and Trieste, Italy. Her route would have taken her west across the southern North Sea into the English Channel, into the Atlantic Ocean and across the Bay of Biscay, through the Strait of Gibraltar and east across the Mediterranean Sea and thence the Tyrrhenian Sea to her first port of call, Messina, situated on the north east tip of Sicily at the southern tip of Italy. From there she would have sailed through the Ionian Sea into the Adriatic Sea to reach her destination of Trieste, close to the Italian border with Slovenia, a lengthy and substantial voyage of about 3500 miles. Circumstances intervened, however, and Fenna never reached her destination.

On 11 March 1881, Fenna was in the vicinity of the Isle of Wight, having battled gales since she left Amsterdam. She had sailed west through the English Channel, experiencing bad weather all the way. If the gales were not bad enough, Fenna’s situation became much worse when the 18 year old ship began to leak. All through the day of the 11th March water inside the ship continued to gain, and her crew realised they faced a hopeless task. The vessel had become waterlogged and as a result, disabled. As it grew dark, the crew consulted with captain Mulder, and a decision was made to abandon the ship. Taking to the vessel’s boat, having had the time only to save their personal effects, they stood by the Fenna until, 30 minutes later she sank beneath the waves.

Captain Mulder and his crew headed north in the darkness until they sighted a red light, which proved to be the end of Bournemouth Pier. There, they were given refreshments and directed to Poole, where they made a safe landing, later obtaining assistance from the Dutch consul.

A few days later, a local steamer, the Ventnor, reported sighting a ship’s mast, standing up from what must have been a wreck, in a position reported at the time as about 2 miles west of the Needles Lighthouse. This was the final resting place of the Fenna.

The wreck of the Fenna was not located or charted until more than a century later. When the wreck was dived, its identity was at first unknown. Divers reported that most of the structure of the ship was gone, apart from her bottom planking and parts of the keel, but a distinctive cargo was still there. In the centre of the wreck stood a pile of neatly stacked bar iron, having the appearance in length and size of railway lines. Nearby, numerous stacks of sheet glass were evident – somewhat smaller in size than greenhouse glass. The wooden packing crates had long since rotted away. Also present were concreted barrel shapes, presumably containing the part cargo of ‘iron in barrels.’ As with the packing cases for the glass, the wooden barrels themselves had rotted away. A small quantity of wrought iron nails were recovered, still in remarkably good condition.

The type and description of cargo, together with the location of the wreck, was sufficient to identify the wreck as that of the Fenna. She lies on a flat sand and shingle seabed, and her cargo of bar iron stands about 2.5 metres high. The once common schooners have now disappeared into history, and it is rare to be able to dive on the remains of one of these vessels.

It seems that some required fields are empty or you have not agreed on licence
PERIODS:
Modern
SUBJECTS:
Archaeology
Maritime
Shipwreck
Surviving relic
Transport
DATA SOURCE:
Contributions