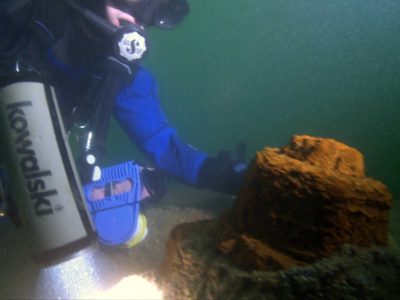 Lying just of the Needles is the is the stern section of a wreck from the First World War. The remains comprise engines, boilers and numbers 3 and 4 holds of the British steamer Serrana. Serrana, 3677 tons, was built in South Shields in 1905 by the well known shipbuilder John Readhead. The ship frequently voyaged from the UK to the Caribbean, carrying passengers as well as cargo. With the advent of the First World War the ship was at considerable risk from submarine attack, and, in common with many others vessels, she was defensively equipped with a 4”stern gun and, less commonly, two 7.5” howitzers, manned by gunners from the Royal Marines Light Infantry and Royal Naval Reserve.

On 19 January 1918, having loaded a general cargo comprising coal, general goods and mail, at Immingham and London, and taken on board 12 passengers, Serrana, with a crew of 46 and a pilot, departed London bound for Plymouth for orders, and thence to the West Indies. Three days later, in the early hours on 22 January, the ship was steaming at 9 knots without lights in a westerly direction down the English Channel, following route instructions issued by the Admiralty. The night was intensely dark and drizzle was falling. When in a position reported to have been about 10 miles west of St Catherine’s Point, Serrana was torpedoed without warning by the German U-boat, UB-35, under the command of Oberleutnant zur Zee Karl Stoeter. Serrana’s Master, captain Albert Maskell, was on the ship’s bridge and reported, ‘An explosion occurred on the port side of the ship amidships with huge clouds of steam. The ship commenced to buckle up amidships and in less than 5 minutes water was washing across decks amidships.’ He ordered distress rockets to be fired and intended to send an SOS on the ship’s radio, but all power had been lost and no message could be sent.

The ship was quickly abandoned and the survivors clambered aboard the ship’s boats and rafts. In the confusion, two men drowned while trying to save themselves, and three stokers were killed by the explosion in the stokehold. A number of other men were badly scalded after the main stokehold steam pipe burst.

Fortunately for the survivors of the Serrana, vessels from the southern Auxilary Patrol Force were at sea, and their crews felt the shock of the explosion and saw the rockets of distress. Proceeding to the scene, they found the Serrana in a sinking condition, by then some 11 miles south of the Needles. The survivors were picked up and assistance requested to attempt to save the ship. This duly arrived in the form of two tugs and steam drifters and the ship was taken in tow stern first, her propeller by this time being clear of the water and her bow clear of the water. She proved extremely difficult to manage, sheering to one side and with seas breaking over her amidships, but eventually the procession reached the entrance to the Needles Channel about an hour before high water. It seemed they had succeeded in saving the ship. However, at this critical point, the swell off the end of the Bridge Reef was such that it caused the towing hawser to part, and Serrana drifted towards the reef. Soon afterwards, she grounded less than half a mile west of the Needles Lighthouse. Efforts to move her continued as the swell died away and the ebb tide set in, but the tugs were unable to move her and she was abandoned for the time being. They intended to resume the tow at the next high water.

In the early hours of the next day, however, the lighthouse keeper reported that the swell had risen again and that Serrana was beginning to break in two. A few hours later, her fate was sealed as the stern section finally broke away and floated free on the flood tide, drifting north east and sinking a quarter of a mile away. She immediately became a serious hazard to navigation as her derricks were visible at all states of the tide

In the years at the end of the war, the stern section was dispersed by the Admiralty in order to increase the depth of water above the wreck. Despite this, much remains on the seabed, in 18 metres of water. Her two boilers are prominent and the steam engine lies on its side. The main stern gun lies on the sea floor close to the stern. The bow section of the wreck lies a quarter of a mile to the south west, slowly rotting away on the Bridge Reef where she grounded in 1918.

Serrana was just one of 55 ships lost to enemy action of the Isle of Wight during the First World War.