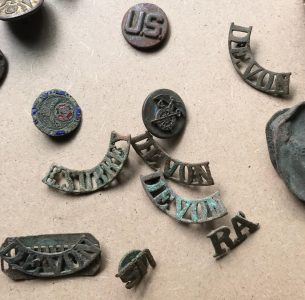 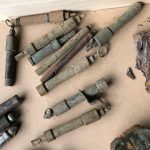 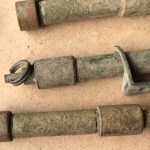 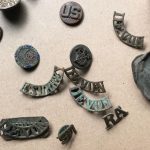 These pictures come from a series of finds made by a metal detectorist at Penerley Camp. He was displaying the items as part of a travelling display of finds from various D Day camps across Southern England, which appears at a variety of WW2 themed events in the Dorset and Hampshire.
He had obtained a rarely granted licence from the landowner to detect in the area and made several visits, though reported that all the finds were made on his first visit. The finds consisted of multiple pull switches and L delays found in association with metal Devon shoulder titles. (Note the other finds shown came from other locations, though US troops did use Penerley camp after D Day).

Research in their War Diary revealed that the 2nd Battalion the Devonshire Regiment was based at Penerley Camp prior to departing for Southampton at 10.30 am on 31st May 1944, where they embarked on the Landing Ship Infantry HMS Glenroy. They sailed into Southampton Water where the ship moored for several days until they sailed for Normandy on 6th June.

The 2nd Devons had previous served in Malta between 1940 and 1943, which explains the presence of the metal shoulder titles. These were not being widely worn by 1944, but had been issued earlier to regular battalions wearing Service Dress rather than the more familiar Battledress. Presumably the soldiers of 2nd Devons wanted to show their seniority by wearing the metal titles, rather than cloth ones. The men also wore the Maltese Cross as their Brigade symbol following their service during the siege of the Island.

Tom Hewitt was with the 2nd Devons when they were sent to the New Forest in May 1944. He recalled that there were “Guards all around the New Forest and we weren’t allowed out. We lived in leaky bell tents and the place was a quagmire at times.” (Quoted in The D Day landing on Gold Beach, by Andrew Holborn 2015).
Sgt W.E. Wills recorded, “The tents when we first saw them were delightful and snug. Each had four camp beds and a small solid-fuel stove. Unfortunately we were told to remove the camp beds and stoves and keep ourselves warm by having another six men in each tent. Our American hosts were flabbergasted.”
“The camp was hidden in thick woods, tents were camouflaged and no washing lines or clothing were allowed outside. Very quickly the walkways became quagmires. Our American hosts did their best to make us feel at home, but American style messing takes a bit of getting used to. Many were the requests for good old Irish stew or “Irish spew” as our hosts were wont to call it.”

“All ranks were confined to camp for security reasons, but many were able to use their West Country knowledge of field craft to find ways of getting through the perimeter barbed wire to slink off for a drink in various pubs. The locals knew we were there, of course, and could guess why, but not where we were going or when. In these circumstances security was maintain – for we didn’t know where or when, either.”
“Cinema performances, in large marquee tents, were nightly and before each show was a record request programme lasting about forty-five minutes. A ‘disc jockey’ had an easily accessible stack of records and would endeavour to satisfy requests shouted from the waiting audience. “ (Quoted in Nothing less than Victory, Russell Miller, 2010)

Pull switches and L Delays were used for demolitions in order to trigger explosives and could be used for booby traps. They might also be used for disposing of dud grenades or shells in training. The pull switched was fired by a pull on the brass ring, which released the firing pin to set off a percussion cap in the other end. This would fire either a detonator or fuse inserted in the “snout”, a brass tube held in place by a screw cap. The photos show a couple of pull switches missing the securing screw cap, with just one showing the snout in place, as often it was destroyed when a device was set off.
The L Delay was a timing device which had a piece of lead wire inside that stretched under tension until breaking when a firing pin was released. The thickness of wire determined how long this would take after the pin was removed. Like the pull switch, there was a snout at the end. The larger hole in the side of the devices is where the safety pin has been removed.

The third device visible is a shorter squat device known as the percussion igniter MkIII. This was similar to the pull switch, but fired immediately the pin was removed, so was more normally used to set off a length of slow burning safety fuse while the soldier retreated to a safe distance.
Please note that all these devices are dangerous in the unfired state and specialist expertise is needed to ensure that even dug items are safe. Handling such devices without such knowledge is risky and if found, expert advice should be obtained via the Police in the first instance.
More information about the 2nd Devons landing from HMS Glenroy on D Day can be found here

It seems that some required fields are empty or you have not agreed on licence
LOCATIONS:
Beaulieu
PERIODS:
Modern
SUBJECTS:
Archaeology
DATA SOURCE:
Contributions
GROUP:
NFNPA Archaeology Volunteers