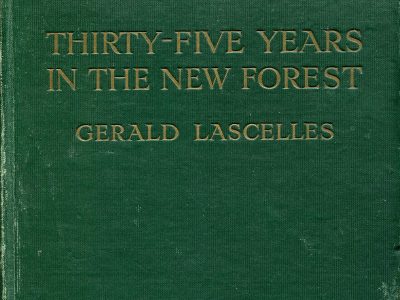 Thirty-Five Years in the New Forest was first published in 1915, the year after Lascelles’s retirement as Deputy Surveyor. He had prevailed over the New Forest as the Crown’s chief officer during a difficult time which had included numerous clashes with the Verderers and the recently formed conservationist group the New Forest Association. His book provides an insight into the varied duties that he had to perform on behalf of his bosses in Whitehall, the Commissioners of Woods.

Lascelles was the second Deputy Surveyor to live at Queen’s House in Lyndhurst and was thus never far from the job in hand. Although he had a number of trusted assistants he liked to ride out early in the mornings, unannounced, and see for himself the work that was being done. He looked after his employees by improving the standard of their accommodation with the aid of his deputy John Roberts, a trained architect.

A keen sportsman and author, he wrote the articles on Sport in the New Forest and, with J Nisbet, Forestry and the New Forest in the Hampshire section of the Victoria County History as well as a number of other, mostly sporting, works notably The Art of Falconry of which he was a master.

He was perhaps the last of what may be termed the truly amateur land managers of the New Forest before the professionalism that came with the introduction of the Forestry Commission in the 1920s. He was the third son of the earl of Harewood and would thus have seen how a large estate was managed. His appointment followed the introduction of the 1877 New Forest Act which changed the priorities in land management away from the timber growing which had been the crown’s chief pre-occupation in the preceding 300 years.

He succeeded Lawrence Cumberbatch who had been forced to leave the job suffering from a nervous condition, something that was to impair Lascelles’s health towards the end of his term in office. He found it hard to accept the new role of the Verderers and a number of the comments in the book may be seen as ‘getting his own back’ for the difficulties he had had to work under. That apart it provides a unique insight into the working of the Forest during and immediately after a fascinating period. It is intriguing to read of the condition he found the Forest in on his appointment ‘Everything was in a state of chaos…’ He also admitted that when he was appointed he had never heard of the “New Forest Question”. This seems quite astonishing for the question of what to do with the area had persisted since the revelations of the 1848 inquiry which had shown the management fraud that had taken place. For the succeeding quarter of a century it had been assumed by many that the New Forest would either be utilised by the military or built over if it was not to become an exclusive crown timber unit.

However he set to, reading the various official reports back to the fifth report of 1789: ‘No one… should fail to study this most excellent and comprehensive report.’ Although his book has sections on his various interests and the conflicts within the New Forest the only visitors it mentions are royal ones. He does however understand that ‘the great and increasing interest now taken in the amenities of the New Forest by the public… will ultimately – even now has – become the dominant feature of the whole question.’