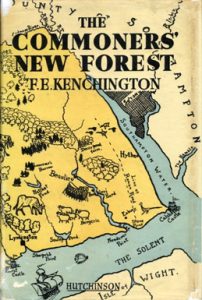 This book was written by Dr F.E. Kenchington, whose family roots were from the Forest and who had returned there whilst working for the County War Agricultural Committee; working on the ‘reclamation’ of Forest lawns and cultivation of the Forest wastes to reduce demands on foreign supplies of food stuffs.

Although Kenchington was new to the area, his family connections gave him a way into the often closed community of the commoners and his writing reflects his respect for their way of life.  His background as a scientific agriculturist, an ‘improver’, he, like Cobbett, saw much of the Forest as wasteland, though, in balance, was not so one-sided to avoid the phrase ‘rape-of-the-earth mono-crop exploitations’.  Indeed, he clearly felt affinity with the Forest way of life whilst also looking to use his scientific expertise to the benefit of the commoners’ New Forest.

On his arrival in the Forest Kenchington noted that the existing literature was often derivative of one or two major works, aimed at the day tripper or incomer and concerned such attraction as might be of interest to them.  As such, the consideration of the local system of agriculture had been largely overlooked; indeed the commoners stock gained more coverage than the stock of commoners behind them.  With this in mind Kenchington sought to redress the balance and write a history of the area from an agricultural perspective together with the political background of the area’s more recent history.

It was, however, more than this; it is written with the characteristic viewpoint of the time, a viewpoint which became embedded in the agriculture of the 1950s where man overcame nature rather than working with it.  Its glance to the future clearly identified the same, though in a positive light which, with the benefit of hindsight, was clearly a time when the great losses of those things we now value about the countryside occurred.  This very viewpoint makes it a valuable social record of the time, and its interpretation of past events also reflects the same.  Historically, it is subject to the same oft repeated inaccuracies of many books of its time but the nearer one approaches the time of writing the more it captures the feeling of the period.  Rounding up, it is an important social record of the New Forest, at a particular time from a particular viewpoint, and well worthy of a place in any collection of Forest books.