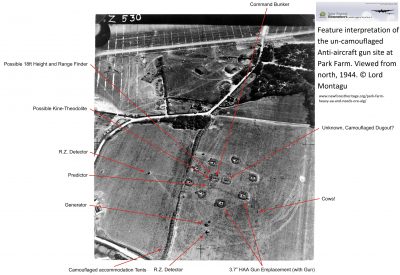 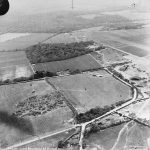 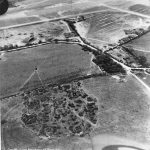 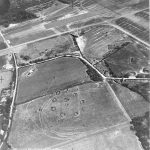 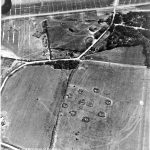 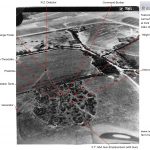 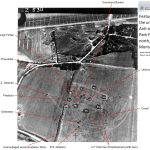 A series of aerial photographs taken in 1944 of Park Farm heavy anti-aircraft site. The aerial views also show parts of Needs Ore (aka Needs Oar) Advanced Landing Ground, including some of the hangers, sections of runway and numerous Typhoons parked on the dispersal’s.

If you look closely at the four photos of the Anti-Aircraft site you will see that the first two were taken earlier than the second two and they show the anti-aircraft just after construction; you can clearly see the guns and other structures associated with the site. The last two show the same site a few days later when camouflage has been added to disguise the site from the air. If you look closely at both sets of photos you might realise that what looks like a hedge is actually the camouflaged tents for the men manning the guns, you might also notice the ponies or cows grazing in the same field as the guns.

Film Footage: Following the links under the Video tab, to the right.

Prepared in 1943 and opened in April 1944, Needs Oar along with several other sites in the New Forest was selected for the construction of temporary Advanced Landing Ground airfield which would support the planned Allied invasion of Europe. It was very busy for seveal months until the advancement of the allies across Europe negated its need in later 1944.
The New Forest Remembers Project volunteers under the guidance of Bournemouth Archaeology excavated one of the Park Farm gun pits during the Festival of British Archaeology 2013 and the excavation report can be read here.
You can find out more about the New Forest’s vital role in D-Day from Mulberry Harbour, to holding camps, road widening, advanced landing grounds, PLUTO and Embarkation by visiting our main page on D-Day in the New Forest.
All photos are credit: Lord Montagu of Beaulieu

In 2018-19 we revisited Park Farm, but this time explore a Bronze Age feature. Discover more here.