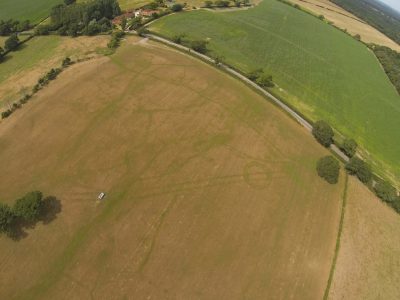 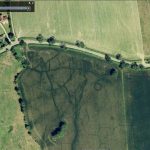 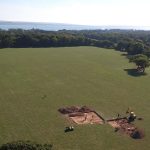 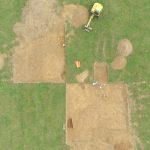 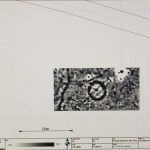 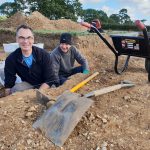 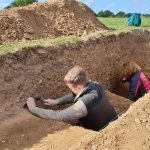 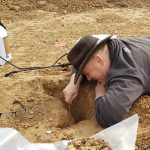 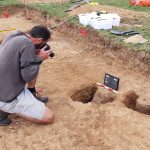 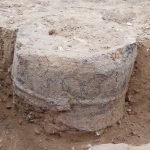 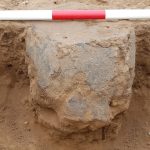 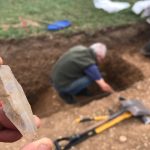 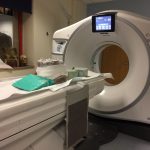 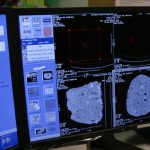 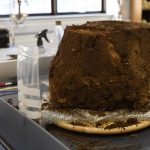 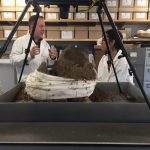 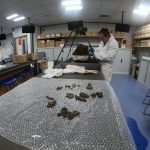 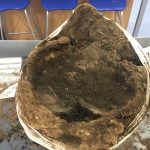 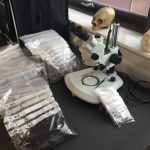 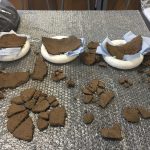 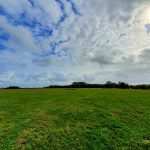 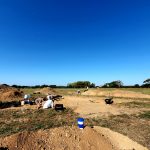 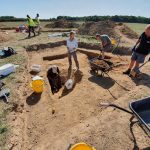 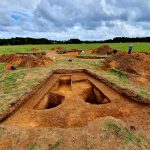 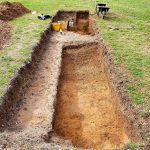 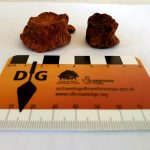 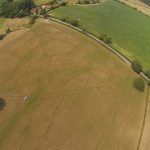 Here is the final fieldwork report for the 2018 and 2019 excavations, with the appendices in part two:

During the 2013 excavation focusing on a World War II gun emplacement and potential Roman Temple on the Beaulieu Estate, aerial recording picked up a very clear crop mark of a potential barrow in one of the adjacent fields. The site had been picked up on 1999 google aerial images and is recorded in the Hampshire Historic Environment Record as a potential Bronze Age barrow (63617).

In spring 2018 volunteers from LoCATE undertook a small geophysical survey on the site of the ring ditch, the results of which identified that there was interior disturbance, which was thought to support the presence of either primary funerary activity or later disturbance from Antiquarians if indeed a Bronze Age barrow site.

Following the results of the Geophysics and consideration of the New Forest National Park Archaeological Research Frameworks, with particular reference to the Neolithic and Bronze Age Research Strategy, it was decided to undertake a small excavation at the site with NFNPA volunteers and Bournemouth Archaeology.

During September 2018 the New Forest National Park Authority ran a small community excavation on the site, as part of their ongoing Heritage Lottery Funded ‘Our Past, Our Future’ Landscape Partnership Scheme.

Early on in the excavation, three cremation urn burials dating from the Bronze Age were discovered within the top of the circular ditch fill. This immediately answered our research questions about Bronze Age activity on the site, but as the excavation progressed, the evidence also began to suggest that the site might have been an important place for even earlier human activity, which Bronze Age settlers then adapted.

Careful excavation of the Bronze Age cremation urns and the immediate area by volunteers revealed that we were looking at 4 urns which had been inverted in the top of the barrows ditch fill and a small patch of cremated material adjacent to one of the urns. In terms of the urns, one had a decorative band pattern on it that will help us to date them and another urn was made up of two smaller pots contained within a large one. The presence of cremated human bone in these urns tells us that this site was a place of memorial for people in the New Forest around 3,000 years ago.

The site was fully metal-detected as part of the archaeological investigation with the only finds being modern metalwork in the topsoil. It is believed that one of the modern metal pieces found in the field boundary ditches was an anomaly originally picked up in the geophysical survey. Two sections were excavated through the field boundary ditches and dating evidence was found, which will help fix their place in the whole chronology of the site.

The excavation didn’t find any evidence of an associated mound or any burial activity in the middle of the monument. There is a possibility that a barrow mound never existed, and that this monument may have instead had an internal or external bank, leading to the possibility that this monument could fall within the ‘mini-henge’ classification instead. There is however no conclusive evidence either way.

Drone Footage of the Open Trenches. Helps set the site in the Landscape

As the excavation progressed and four sections were cut through the ring ditch, evidence of human activity below the level of the urns was found, including two Neolithic flints from around 5,000 years ago. One of these may have been attached to a wooden shaft and used as a spear. Sections though the ditch also suggested a double ditch with at least 4 phases of re-cutting and filling before the Urns were dug into the latest ditch fill phase. Additional geophysical scans undertaken during the excavation and the aerial photos were revisited and suggest that the ring ditch might have had terminal points and entrances.

The urns were all block lifted to be scanned, recorded and micro-excavated with the soil and contents being analysed using scientific techniques in the lab to date and conserve them, due to the poor state they are in after being buried for so long in acidic soil. It is hoped that they will ultimately be displayed in the New Forest.

Post excavation of the Bronze Age urns started with a preliminary CT scan at Salisbury Hospital and the scans have been used to guide the micro excavation of the urns. The CT animations will also feature in the final film of the excavation along with commentary so we’ll let you know when this is released.

All vessels are inverted, with Vessels 2 and 3 showing signs of truncation from above. The smallest Vessel  3 was very fragmented and contained cremated bone within and beneath (outside) the vessel itself. Vessel 2 was also very fragile and contained no cremated bone at all. The largest urn Vessel 1 is potentially the most interesting-it appears this one has not been truncated with the base found within the vessel itself probably due to collapse once interred. This indicates the vessel was not 100% filled with material and that a void would have existed. The soil samples have been processed and we are starting to work with the pottery sherds to assess the potential for reconstruction.

It was envisaged that the results of the 2018 excavation would contribute to a review of Bronze Age ring ditch monuments in the New Forest landscape, providing information to help understand their distribution and forms, and further our understanding of the typology and classification of barrows in the New Forest. What the 2018 season proved is that reliance on aerial photography alone to classify earthworks or cropmarks can be problematic and while features in the landscape may superficially resemble a particular feature or monument-type only further investigation can provide sufficient levels of assurance in the definition and interpretation of these features.

In September 2019 volunteers from the New Forest National Park under the guidance of National Park archaeologists and Bournemouth Archaeology returned to the site for a second season of excavation. The two-week excavation consisted of 76 volunteer days alongside the professionals from the New Forest and Bournemouth Archaeology.

The ring ditch monument was re-investigated in two trenches which
had specific aims, including further investigation of the morphology of the ring ditches, exploring the presence of a potential entrance gap on the north-west side of the monument and recovery of evidence to date and better understand the full chronology of activity that occurred on the site.

This phase of the project also took the opportunity to test some of the features in the wider landscape that featured in the results of the 2018 magnetometer survey. A third trench excavated in 2019, which was located over geophysical anomalies 90m to the west of the ring ditch, confirmed the presence of a potential prehistoric ditch.

After the 2019 excavation extensive post-excavation work was undertaken, including specialist assessment of the flint and ceramic assemblages, micro-excavation of recovered cremation urns and human bone analysis and palaeoenvironmental assessment, analysis and radiocarbon dating.

The radiocarbon dating recovered from the lowest fill of the Phase 1 ring ditch came back with a surprising Mesolithic date, which does not line up with this type of monument. All other evidence has comfortably placed this earliest phase of the ditch sequence within the Early Bronze Age, and it is thought that Mesolithic features or deposits must have been truncated during the construction of the first, Early Bronze Age, ring ditch, which led to the redeposition of this early material within a much later feature.

The fieldwork confirmed that the ring ditch monument was made up of three distinct phases:

Phase 1: Ring Ditch. There was no evidence of an entrance within excavated areas but there may well have been one somewhere along its circuit. This ditch silted up naturally and there was no evidence of deliberate backfilling. Charcoal was recovered from the base of these earliest ditches so we await the C14 dates with great anticipation.

Phase 2: Ring Ditch. A larger ring ditch was cut along the same alignment but increased in size and diameter, cutting the outer edge of the Phase 1 ring ditch. One obvious entrance on north east side was confirmed in this Phase. Three re-cut episodes were identified and the general trend is that the ditch gets wider and shallower over time. Expansion is always towards the interior which strongly suggests the bank was outside the ditch. This also conforms with other monuments of this type.

Phase 3: Middle Bronze Age cremation cemetery. The main information regarding this phase came from the 2018 dig, although an additional urn was found and left in situ during the 2019 excavation. The cemetery provides a reasonable end date for the monument from the Middle Bronze Age urns; around 1500BC.

Here is the final report, with the combined results of archaeological excavations undertaken in 2018 and 2019.

It seems that some required fields are empty or you have not agreed on licence
LOCATIONS:
Beaulieu
PERIODS:
Mesolithic
Neolithic
Bronze Age
SUBJECTS:
Archaeology
Drone
Events and Exhibitions
Our Past Our Future
Report
DATA SOURCE:
Contributions
GROUP:
LoCATE