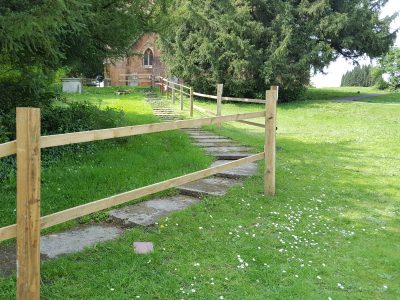 The old steps at Lyndhurst Church made of old gravestones. New path visible to right. Credit:NFNPA 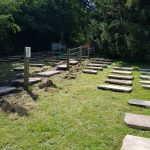 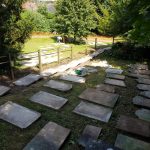 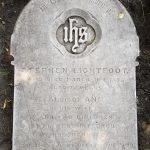 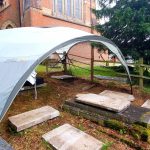 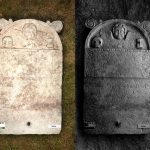 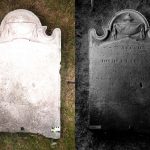 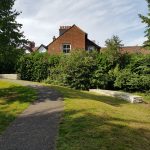 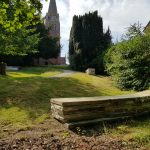 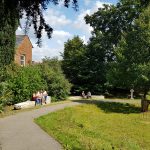 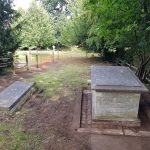 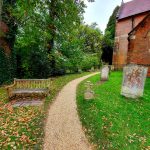 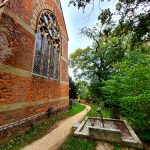 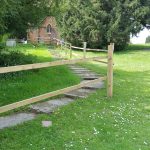 Following the installation of a new safe accessible route to school from the main Lyndhurst carpark through the St Michael’s and All Angels churchyard avoiding the footpath along the main road the old stepped path through the churchyard was fenced off and was slowly disappearing under vegetation. If you looked closely at this old path you would have seen that it was made out of old gravestones. The gravestones have been moved to create the path from elsewhere in the graveyard and they do not contain burials under them.

As part of the original planning approval for the new path a requirement was that the old steps made from old gravestones was to be removed.

The programme of work is being managed by the New Forest National Park Authority, and has been given formal approval by Winchester Diocese and the Planning Authority. It will improve access to the churchyard’s important heritage features and is funded by the New Forest LEADER local action group through the European Agricultural Fund for Rural Development. The churchyard is maintained by New Forest District Council as a closed burial ground and the monuments are technically heirlooms. The church and the District Council responsibilities only require that the moments are safe for public access to the churchyard.

As part of the project the gravestones will all be cleaned and recorded using RTI photography to read the faded inscriptions to help reveal the names of the people they memorialised. The hope is that the names will then be linked back to the burial registers and potentially their original burial location. It will also allow families to re-link their family histories with the headstones in the churchyard. The removed headstones will be used to create benches in the churchyard, but they will all be logged so if you are searching for a specific one we can show you where they have ended up.

Further work has seen the footpath extended to allow easy access to Alice Liddell’s memorial behind the church.

During July 2019, Archaeovision undertook a Reflectance Transformation Imaging (RTI) survey of the 43 headstones that were removed from the old path as well as another 37 headstones and other engraved stones recovered from the ditch running parallel to the footpath. The 80 headstones were all photographed and processed to reveal the inscriptions and identify some of the lost names and families originally buried in St Michael’s.

Some of the highlights are included in the images above.

Alternatively all of the photography results from RTI work undertaken in the graveyard along with the transcriptions can be found here: Lyndhurst St Michaels & All Angels RTI

All of the results will be inputted into the spreadsheet of monuments in St Michael’s and All Angels allowing the public to find out who is buried in the churchyard.

Three of the monuments in the churchyard are listed and are dealt with as Listed Buildings. These were recently repaired as part of National Lottery Heritage Funding managed by the New Forest National Park and have been removed from the Historic England Buildings at Risk register.

Is part funded by the European Agricultural Fund for Rural Development

Example of one of the Graves following RTI