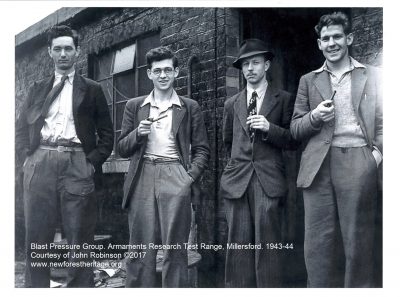 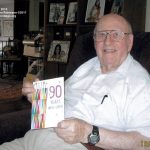 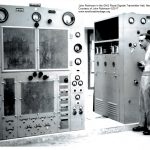 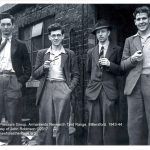 John Robinson, now living in Santa Monica, California, USA, heard the extracts of an interview with Betty McCarthy – Memories of assistant photographer at Millersford, who also worked at the Millersford range. He wrote to use with his memories and a few photos.

John Robinson was a lab assistant at the Armaments Research Test Range, Millersford – between February 1943 to June 1944.

I was born in Hull, East Yorkshire in 1925. Shortly after the outbreak of war, I was evacuated (together with most of my school mates) across the Humber to Brigg in Lincolnshire. We all returned home for Christmas and most of us including myself, did not return to Brigg. I was part of another evacuation in the spring of 1940; this time to Holme-On-Spalding Moor, E.Yorks. Later in the year most of my school mates and I again returned to Hull, just in time to experience the start of heavy air raids. I believe that Hull was second only to London in the number and severity of raids.

I finished secondary school in June 1942 and later wrote to the Ministry of Food hoping to get employment as a lab assistant in one of their establishments. I was very interested in chemistry, especially organic chemistry, at the time. I was surprised to receive a reply from the Ministry of Supply, asking if I was interested in radio. As I had built a simple one valve short wave receiver, I wrote back saying “Yes”. The upshot was that I was sent to the South West Essex Technical College in Walthamstow on a three month course in basic electronics. This was the start of my 45 year career in electronics. In January 1943, I started work at the Armaments Research Test Range at Millersford.

I worked in the Blast Pressure group. We occupied (I think there were four) bunkers as described by Betty McCarthy, in a circle, surrounding ground zero. Our job was to record the blast pressure of (mostly 500 pound) bombs. This was done by using 8 quartz crystal sensors (gauges) spaced at various distances from the bomb, connected to a blast pressure recorder via long co-axial cables. Each bunker had one REDIFON blast pressure recorder. Switching was done by the same switching device described by Betty. The recorders were large light tight metal enclosures about the size of a wardrobe; they each contained a rotating drum around which photographic paper (about 5ftx3in) was wrapped. There were 8 cathode ray tubes mounted in 2 sets of 4 each surrounding the drum, fed by 8 amplifiers which were connected to the 8 co-axial cables. Each bunker was equipped with a darkroom used for developing the records.

At the end of each roll there was a piece that was too short to go around the drum. I saved these and used them in an ancient Kodak camera which happened to be the right width. This gave me paper negatives. Prints were made by shining light through the back onto another piece of paper. The quality was pretty awful, but film was virtually impossible to come by during the war. One of the girls working in the main building assembled the gauges – she was known as “Crystal Packing Momma!”.

I remember the plane crash; as Betty said, no one saw it happen, but we all heard the noise. I came out of my bunker and saw a mob of people rushing to the plane.

It was definitely a Lancaster, because I remember it had oval shaped tail fins; Halifax’s had rectangular ones. Amazingly, no one was killed, although, as I recall, the bomb aimer had a broken nose and two broken legs – the rest of the crew suffered only minor injuries. Because of the highly secret nature of the project, a detachment of the RAF Regiment was detailed to guard the wreckage. A day or two later, one of the men was sitting on the tail with his leg bent upwards, his mate was fooling around with his rifle which discharged. The bullet entered his mate’s leg twice – first in the shin, and then in the thigh, resulting in injuries more severe than those of the crew.

It’s strange the tricks memory plays; I don’t remember Betty McCarthy; in fact I only remember the names of 8 people – Chadwick, Miss Fazakerly, Rimmer, Soady (who wanted to join the Fleet Air Arm), Stride, Trott, Raymond Gyton (who shared digs with me in Redlynch), and Victoria, (one of the Welsh twins -1 don’t remember her last name). I wish my memory was as good as Betty’s!

Photos:
Blast Pressure group outside bunker Armaments Research Test Range, Millersford. John Robinson (3rd from left).
Four of my colleagues standing outside our bunker. I seem to recall it was taken by someone with a Rolleiflex camera – maybe Betty McCarthy? The tall chap on the left is Mr. Trott.

Uploaded on behalf of John Robinson

You can find more memories of Millersford Experimental Work Below