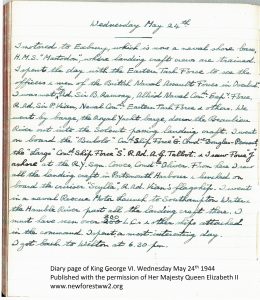 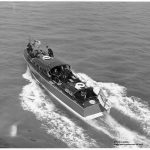 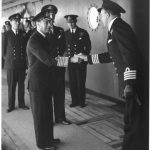 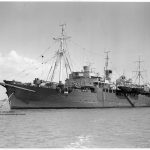 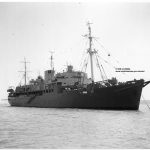 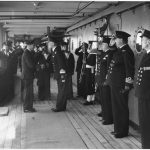 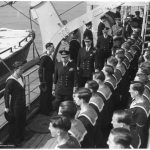 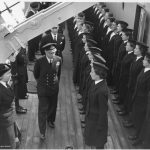 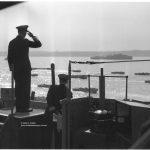 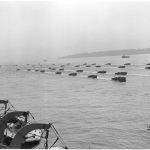 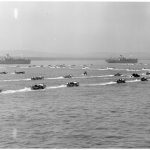 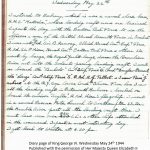 Aerolite was the codename given to the visit on May 24th 1944 when King George VI came to review the assembled Eastern Task Force invasion fleet.

I motored to Exbury, which is now a naval shore base, H.M.S.”Mastodon”, where landing craft crews are trained. I spent the day with the Eastern Task Force to see the officers & men of the British Naval Assault Forces in Overlord. I was met by Admiral Sir B. Ramsay, Allied Naval Commander Expeditionary Force, Rear Admiral, Sir P. Vian, Naval Commander Eastern Task Force & others. We went by barge, the Royal Yacht barge, down the Beaulieu River out into the Solent passing landing craft. I went on board the “Bulolo” Command Ship, Force “G”, Commander Douglas-Pennant, the “Largs” Command Ship, Force “S”, Rear Admiral A.G. Talbot and I saw Force “J” ashore at the Royal Yacht Squadron, Cowes, Commodore Oliver. From here I saw all the landing craft in Portsmouth Harbour & lunched on board the cruiser “Scylla”, Rear Admiral Vian’s flagship. I went in a Naval Rescue Motor Launch to Southampton Water & the Hamble River passed all the landing craft there. I must have seen over 300 landing crafts and other ships attached in the command. I spent a most interesting day. I got back to Wilton at 6:30 pm.

(This transcription has been made with the permission of Her Majesty Queen Elizabeth II. No unauthorised reproduction is permitted)

He was to arrive at H.M.S. Mastodon at 9.30 a.m. where Captain Swinley and the ship’s company would provide the guard of honour. He would then proceed to Gilbury and board the Royal Barge.

This gave rise to great excitement amongst the Wrens, however the Captain (a misogynist of note!) confined them to the upstairs rooms of the House, only allowing the male ratings to be inspected on the lawn in front of the House. Others remember that some of the WRENs were allowed to stand in the Ha-ha, so only a line of hats were visible for inspection. They also sneaked into the shrubberies and watched from there.

Being May, of course the Gardens were in full flower, so Swinley spent days learning all about the various flowers in anticipation of having to show the Monarch around. The King, however, had other ideas, having been a regular visitor to Exbury prior to the War. “No” he told Swinley politely, he knew his own way round and would relish a few moments of tranquillity before having to review his fleet.

Down at the Gilbury jetty there was much excitement amongst the boats crews, one crew, expecting to be inspected, found that their feet had been glued to the decks by sticky tar. Luckily the King had spent longer than the 15 minutes allotted him in the Gardens and they were saved the embarrassment of not being able to come smartly to attention.

He boarded the C.I.C. Portsmouth’s barge, known as ‘The Green Parrot’ and slowly and quietly went down the Beaulieu River. All the C.O.’s saluted in turn. It was a very quiet and sombre occasion.

In the Solent he transferred to a high speed Motor Launch and with his party of Admirals sped off. The return to the barge presented the King with a moment of humour. Their craft approached at high speed, creating quite a wave. The poor WREN on the bow of the barge had enormous difficulty in maintaining her dignity and not falling into the sea. The King and the Admirals watched this balancing act with much mirth, commenting to the effect that WRENs look better in skirts.

There is a short section of archive footage filmed at Wilton House, Wiltshire on the 25 May 1944 held by criticalpast.com.  It shows Allied officers attending a conference in Wilton House shortly before D-Day landings during World War II. Group of U.S. and British officers attend a conference at Southern Command (Wilton House). Includes British General Miller at his desk.

See the footage (No sound) here.

(Please note that this is a third part site and we are not respectable for it content.)