In 1709 Britain experienced an influx of about 13,000 refugees, known as the poor Palatines, from Germany. They were largely protestant, fleeing from aggression by the catholic Louis XIV of France. Mainly these people hoped to continue their journey to America where other German refugees had found new homes in previous years.

The Whig party which controlled parliament at that time was of the opinion that an increase in population would help develop the economic wealth of the nation, while the Tory party was concerned that the number of these immigrants who were largely poor would lead to instability.

Daniel Defoe, who was a leading radical thinker of the time, suggested that an area of the New Forest near Lyndhurst be set aside to create a model township for the refugees. Twenty honest and industrious men capable in husbandry would be identified and given 200 acres each. Known as farmers, these men  would be given money to stock their farms and live rent and tax free for twenty years. Through the wealth they generated from their farming they would pay for the whole infrastructure of the town, including doctors, ministers of religion, carpenters, builders, a miller and other labourers: inn-keeping was expected to be a part-time occupation. In total Defoe expected that this scheme would support some six or seven hundred people. After twenty years when the town was established the residents would start to pay taxes.

Ultimately Defoe expected there to be about 20 such schemes built across the country.

Defoe’s sketch map shows the layout of the township, with the central crossroad housing the necessary infrastructure for the establishment of a flourishing community. He expected that common land would be available outside the perimeter to allow the tradespeople to keep a few cattle or sheep to help eke out their existence. The twenty farms are marked out, although the farm buildings are probably not to scale.

Nowadays few of us have an easy understanding of what 200 acres means. Far less do we understand the concept of 40,000 acres, not to mention the extent of land required for the Town Hall, church, labourers’ cottages and other pieces of infrastructure.

The map shows the extent of land that Defoe’s township would have covered if it were planted half way between Lyndhurst and Brockenhurst.

Defoe made an assumption that the soil of the new Forest was of sufficient quality to make his scheme work. In fact the reason for the New Forest’s survival as a wilderness is that the ground is generally of little agricultural merit.

Defoe’s, 1962, A Tour through the whole Island of Great Britain Vol-1 can be read online:

The Forest Toys factory was established in Brockenhurst in 1922 by Francis (Frank) Whittington (1876-1973). Frank Whittington had moved to Brockenhurst at the end of World War I at the recommendation of a friend, due to the beauty of the area. The factory produced hand carved and painted wooden toys of people and animals.

All toys were carved, assembled, and painted by hand by Frank Whittington and his employees, and were made to scale to reflect the true proportions of the people and animals being made, with the typical scale being ¾ inch = 1 foot. They were carved out of pine imported from North America via the Southampton docks which was then transported to the Brockenhurst factory. They were most often made in several pieces which were then glued together and later painted.

The factory’s exhibit in a British Industries Fair caused a boost to business due to the toys catching the attention of Queen Mary and the Prince of Wales, who were in attendance. Queen Mary ordered two dozen of the Noah’s Ark set at the fair, news of which made its way into several newspapers, including the Evening Standard and the Evening News. The toys grew in popularity locally, nationally, and internationally with the factory receiving visitors from all over the world.

Most of the toys were mass produced, however many people commissioned Whittington to make specific or personal carvings of, for example, pets, which were often made slightly larger than the mass-produced animals to allow for more detail. Each one would be carved using a photo reference, and particular attention was given to the details in order to produce a carving that was unique and looked like the person or animal in question.

While carvings of animals were immensely popular, carvings of people of varying professions were also produced, such as athletes, stagecoach drivers, and farm workers. Popular sets included The Meet and The Hunt, which depicted a group of riders with their horses, hunting dogs, and foxes, preparing for and going on a fox hunt, and Noah’s Ark, which consisted of a wooden Ark, Noah, and two of several species of animal. Attention was given to ensuring that the male and female of each species had their distinct characteristics, such as male lions with their mane, and female lions without a mane, while being slightly smaller than the males.

Dogs were a very popular choice, and at its peak the factory made upwards of 60 different breeds. They were both mass-produced and special ordered in order to resemble specific pets. Special attention was made in regard to the ear position, proportion, and colouring of each of the different breeds in order to ensure that the toys were realistic and of high quality.

The Forest Toys factory shutdown at the beginning of World War II due to the war causing a scarcity of resources required to produce the toys, as the wood used was imported from North America, as well as due to many of the factory’s workers being drafted. 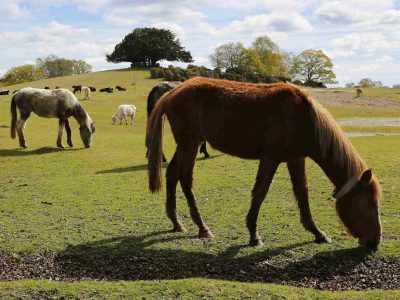 Hello and welcome to the New Forest Knowledge blog!

We are delighted to introduce our project which is supported by the Heritage Lottery Fund and part of the Our Past, Our Future landscape partnership scheme led by the New Forest National Park Authority.

You can learn more about us and the project from the About pages, or by visiting our Facebook page

We will be blogging all about our work and what we are up to over the course of the project. We hope you will get involved