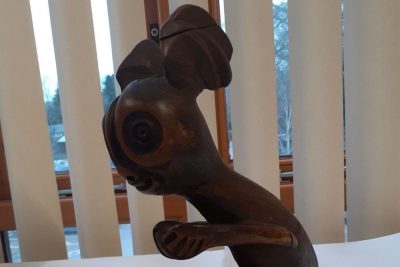 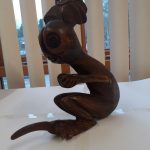 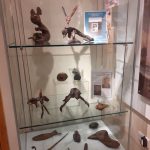 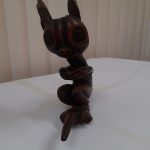 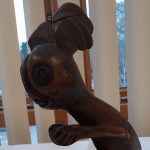 In a display case at the New Forest Heritage Centre are several curious wooden objects. They all demand their viewers’ attentions, but when I stopped to investigate, one, took my notice.

This carved wooden object is about 28cm high x 26 cm long x 8 cm (at its widest point). It has a polished sheen and smooth surface, which, in places is rich with raised contours ridges and curves, angles, hollows and sunken grooves. At first glance this object appears brown, but closer inspection reveals many shades of ochre, russet, yellows, and creams greying to black. It is a fantastical creature, with a body, face, arms and legs. This object-creature sits, or squats on its haunches toward the back and left of the cabinet. At or on its feet is a disturbing, slightly threatening looking protrusion. Is it a claw or horn, or something more benign such as an ‘ET’-like finger seeking connections and reassurance? It is of this world, it is made of wood, yet it exudes ‘E’xtra- ‘T’errestrial qualities.

The object-creature has a startled look; its eyes are open wide, it is transfixed (or transfixing). Its body looks hunched, its hands or paws are clasped, wringing. It looks anxious. Is this object spellbound, or is it in the act of casting a spell? It exudes a sense of dynamism, vigour and nervous energy. It appears to be cowering toward the back of the display cabinet, shy perhaps and wary of the gaze of visitors. But look again, and it could be that this object-creature is about to pounce, leap out toward the viewer and hug or grab him or her. In the moment of encounter when we confront and are confronted by this mysterious object that it is animated and vibrant.

As I behold the object-creature and it stares wide-eyed, back at me.[i] My presence seems to invigorate it, encourages it to perform and act. I am the focus of its attention, just as it is the focus of mine. This is ‘enchanted looking’. My act of intense attention seems to draw a circle around us, excluding everything but me and the object-creature. All circumambient images are banished and murmuring voices stilled. [ii]

This momentary relationship evokes reactions in me; physical – I step back, then move closer and peer in, nose almost touching the glass of the case; emotional – I am unnerved by the object, its expression, how it appears to return my gaze. But while it may exude a sense of threat, I also feel sympathetic towards it – it looks nervous, anxious and vulnerable. ‘What could I do to comfort it?’ I find myself thinking. My imagination is also ignited. This creature is mysterious, magical, charming and awesome. I find myself drawing on other cultural references and personal memories. It reminds me of animals featured in wildlife programmes filmed in distant exotic locations; it brings to mind characters from films, comics and books. I am provoked to reflect on an exhibition once visited, (African Art in the Bode Museum, Berlin), which featured contemporary Western and Africa iconography. Did I meet this object-creature there too, I wonder?

Although it is not a life-like representation of any animal I have seen its physical form – size and shape, its big eyes, button nose and large ears lend it rabbit-like qualities. ‘This is peculiar’, I think to myself, as I remember that 27 December 2021 is the 150th anniversary of the publication of Through the Looking Glass: And What Alice Found There (1871), and glance to my left and see the same object-creature reflected in another intriguing object on display in the museum –Alice Liddle’s mirror. As a child, Alice, a resident of Lyndhurst, is widely considered to have been Lewis Carroll’s inspiration for the titular character in Alice’s Adventures in Wonderland (1865) and Through the Looking Glass. This avatar of Lewis Carroll’s famous anthropomorphic rabbit may be brown rather than white, naked rather than clothed, but it is enchanting and enthralling, nonetheless.

There is little interpretive text accompanying this display of puzzling, eerie objects. This enables me to create my own meanings and craft my personal imaginative, emotional understandings of, and responses to the object creature that caught my attention. But it also provokes my curiosity to discover more about it. Who made it? Why? When? Where? So, I walked through the adjacent door into the library of the New Forest Heritage Centre and discovered a book written by the son of the craftsman who carved the curious creatures. In Christopher Charman’s memoir, In the Spirit of Godshill: A New Forest Life. I learn that Tom Charman (b.1863 – d.1935), was an artist, performer, and craftsman who lived and worked for many years at Godshill in the New Forest. https://nfknowledge.org/record/nfc-162156/

In his youth, Tom Charman travelled to the United States and found work as a cartoonist for a New Jersey newspaper. His enthusiasm for cartoons led him to collect ‘dozens of comics full of classic character like Popeye.’[iii] I begin to wonder if there is something cartoon-like in these carved images.

Charman’s son, Christopher, recounts that during his period in America, Tom experienced what he described as a bout of ‘artistic paralysis’. ‘The voices in my father’s dreams convinced him that he was being looked after by some spiritual force outside of the normal…’[iv] This experience left Charman with a deep interest in spiritualism.[v]

Back at Godshill, Charman would venture out to collect firewood in the Forest. Gorse stumps and distorted wood from old holly trees were favoured by Charman and he began to carve these ‘into the most original imaginary creatures.’[vi] Charman’s carvings caught the eye of fellow New Forest resident, Sir Arthur Conan Doyle, who became ‘fascinated’ by Tom’s ‘strange wooden carvings.’[vii] They discovered a mutual interest in spiritualism and the paranormal and, Christopher Charman recalls, ‘Conan Doyle was a frequent visitor to our little bungalow’.[viii]

Interestingly, Tom Charman’s father in-law was Earnest Westlake, a founder member of the Order of Woodcraft Chivalry. Westlake, according to Christopher Charman, ‘had an idea that’ his son-in law ‘would be a great help with…the Order.’[ix] The Order of Woodcraft Chivalry was one of several popular woodland and woodcraft-focussed movements during the first half of the twentieth century. It was scouting like but eschewed military influences and emphasized virtues of fellowship and woodcraft. The Order included some well-known names among its membership and is alleged to have accepted concepts of Neopaganism. Connections have also been drawn between the Order of Woodcraft Chivalry, the New Forest coven and the religion of Wicca. https://artsandculture.google.com/entity/order-of-woodcraft-chivalry/m03d1f68?hl=en

This information ignited my imagination and I started to wonder about the esoteric expression on the face of the object-creature; its recognizable display of emotions which are reflected in its physicality. My reaction to this object-creature would not have been what it was, if it was not what it was – its density, colour, shape, and form. The materiality and material form of the object provoked me to react and respond. So, I pondered, does it possess agency – the capacity of something or someone to effect change in its environment? These ideas challenge traditional Western conventions about the relationships between people and things. Is the world of which we are a part simply passive and us humans the only actants? I was reminded of Jane Bennett’s powerful book, Vibrant Matter in which she explores the active participation of non-human forces affecting situations and the role of everyday physical phenomena in events.[x] Then, I remembered Luci Attala’s and Louise Steel’s contention that agency is not placed within any material or flesh but rather can be regarded as the outcome of relationships.[xi] This seemed to align with my experience on encountering the object creature.

As I interrogated the object-creature further, I noticed a whorl of dark, knotty wood and reflected on how the wood might feel if held. Was it hard or did it ‘give’ a little? Would it feel cool to the touch, or perhaps exude a sense of warmth? My nearness to the object-creature stimulated a notion of ‘haptic fancy’. Actual touch was not possible because we were separated by the glass case, but I could imagine the object’s tactility, nonetheless.[xii] How did the wood feel to the maker? The object creature was not the result of a blueprint in the craftsperson’s mind. It seemed to me more likely to have been a co-creation; an emergence from a fluid process in which maker and material participated and conspired.[xiii]

The object-creature I encounter has a time-full presence, expresses the nature of its physical materiality and, in equal measure, the dexterity, skill, emotions, understandings and imaginings of the craftsperson who worked with it. Crouched on the shelf in the display cabinet it suggests a liminal space – myth and reality, potent and passive, magical artefact and commonplace material. It defies human knowing. Encounter this ‘spirit of the wood’ at the New Forest Heritage Centre and discover how it makes you feel. In the meantime, more of the fascinating carvings of Tom Charman can be seen on the New Forest Knowledge website. https://nfknowledge.org/?s=charman

[i] See, Karen Barad, ‘Posthumanist Performativity: Toward an understanding of how matter comes to matter’ in Signs: Journal of Women and Culture in Society 28(3), 2003, 801-31, (p.817) and Karen Barad, Meeting the Universe Halfway: Quantum Physics and the Entanglement of Matter and Meaning, (Durham NC and London: Duke University Press, 2007).