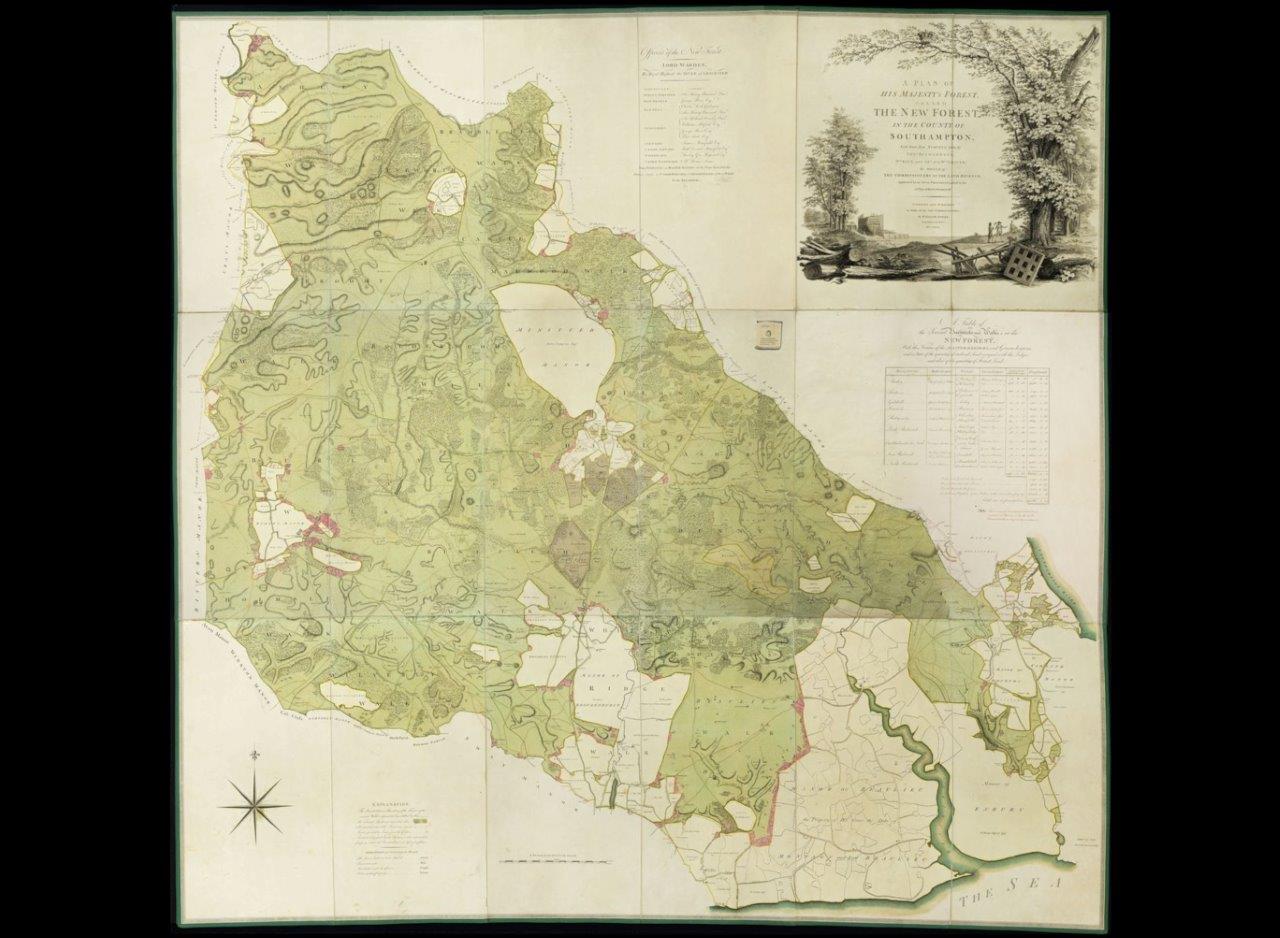 Published 1789 by William Faden, Geographer to the King. Surveyed by Thomas Richardson, William King, and Abraham and William Driver.

Scale: three and a half inches to one mile

One of the oldest maps in the Christopher Tower Library collection is known as the Drivers’ map after two of its original four surveyors. It was published in 1789 by William Faden, Geographer to the King, in support of a parliamentary report into the New Forest. At that time the forest was in a desperate condition, pulled apart by powerful conflicting interests. The Lord Warden of the New Forest was appointed to preserve the Forest for the King’s sport but was mainly concerned with dispensing patronage to loyal cronies. The Surveyor General of Woods had responsibility for the development of timber, mainly for the navy, and the generation of revenue for the state. Almost in despair at the contradictions within the management of the Forest, the Report draws the conclusion that no person would manage their own property in such a manner.

Parliament was determined to resolve this problem and commissioned a large scale map to help clarify the exact state of the forest. As well as marking the timber enclosures in the Forest, encroachments on Crown property were shown in red, crown leases in purple and intermediate land holdings in yellow. Such is the attention to detail in this map that even a misplaced boundary stone is recorded. Such is the accuracy that it was used as a base map for most parliamentary reports into the Forest for the following 75 years. Several later copies are also available in the library, showing the rolling program of enclosing and dis-enclosing parcels of woodland over the years.

Click on a tile to view a larger image. In some browsers a low resolution image may appear. Clicking again on the image will give a clear view of that tile. Each tile corresponds with one of the original 18 linen panels from which the map is constructed.

For a modern audience it is interesting to see the detail of the development of villages such as Burley, Wood Green and East Boldre from their original encroachments. Landmarks such as Puttle’s Bridge and the Naked Man near Wilverly Enclosure are clearly visible. It is also interesting to note that the word Enclosure is spelled on the map in the orthodox way as it is in Johnson’s Dictionary rather than Inclosure as it is written locally.

The Cartouche, the decorative title in the top right corner of the map, offers a summary of the political vision for the Forest’s future, confirming its role to be a place for growing naval timber. Components of the image include:

The only reference to the Forest’s previous function as a royal sporting ground is on the mound between the woodsmen and the oak tree. It is an image of the memorial to King William Rufus who died a violent and mysterious death while hunting in the Forest.

It seems that some required fields are empty or you have not agreed on licence
PERIODS:
Modern
SUBJECTS:
History
Maps and Plans
Monarchy
DATA SOURCE:
Contributions