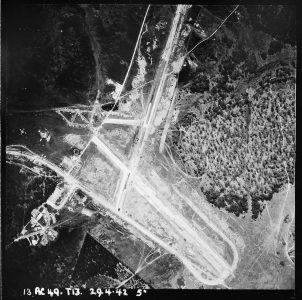 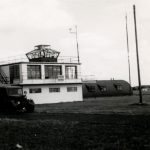 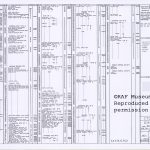 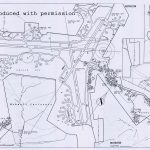 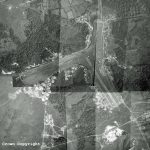 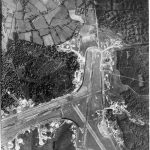 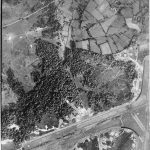 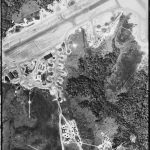 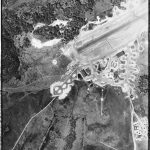 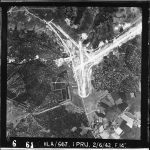 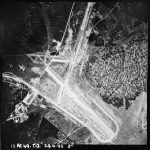 A 1946 RAF aerial image of Stoney Cross airfield and 1946 asset plan of the site compiled by the Air Ministry Works Directorate in preperation for closing and returning the site to original landowners.

Due to its location and the topography of the land, the airfield had an unusual runway layout which nonetheless conformed to the Class A airfield standard set by the Air Ministry. It had one main runway, aligned 07/25, with two secondary runways, aligned 01/19 and 15/33; a large number of frying-pan type dispersal pads with a few loops connecting to an enclosing perimeter track, of a standard width of 50 feet.

Although officially opened in November 1942, RAF Fighter Command No. 239 Squadron’s P-51B Mustangs that arrived in January 1943 followed by those of No. 26 Squadron had to operate amid on-going construction work. After the Mustang squadrons moved out in April 1943 there was additional construction at the airfield until August 1943.
In August, RAF Bomber Command No. 297 Squadron took up residence. Early in March 1944 the RAF moved out and the USAAF Ninth Air Force moved in to use Stoney Cross as a forward base for tactical fighters.
Stoney Cross became known as USAAF Station AAF-452 for security reasons during the war, its USAAF Station Code was “SS”.
The 367th fighter group entered combat on 9 May 1944, attacking railways, bridges, hangars, and other targets in western France, and escorting bombers that struck airfields, marshalling yards and other facilities in the same area.
In the latter half of June the 367th switched to ground attack missions supporting First Army ground forces in France.
On 6 July the 367th Fighter was moved to nearby RAF Ibsley to make way for the 387th Bomb Group.
When the Americans moved into France by 5 September 1944, Stoney Cross reverted to RAF Transport Command control and, at first, the station was used for the assessment and repair of gliders recovered from the Normandy operations.
Following the end of hostilities in Europe, Stoney Cross was developed as a major staging post for RAF transports flying to the Far East. This activity was gradually reduced and by December 1946 the remaining units had transferred to RAF Manston. However, Stoney Cross was retained on a care and maintenance basis until January 1948 when the airfield was released back to its pre-war owners.
A number of APs (Aerial Photographs) of sites in the New Forest, taken during or just after WWII, have become available (from English Heritage) via the American Air Museum website.  We are adding these to the online archive as they become available. We have had to reduce the size of some of them, to see them at full resolution visit www.americanairmuseum.com.
There are numerous articles about Stoney Cross Airfield which we have tried to pull together here as potential further reading:

It seems that some required fields are empty or you have not agreed on licence
DATA SOURCE:
Contributions
New Forest Remembers