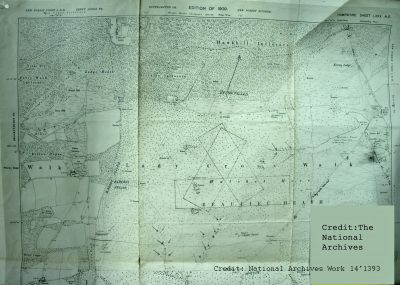 1909 Ordnance Survey Map of Beaulieu Heath annotated with location of runways, areas of felling, military activity and some of the excavated Barrows. Credit: National Archives, Work.14'1393 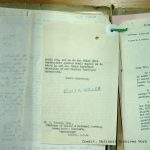 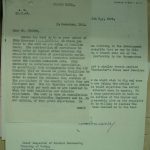 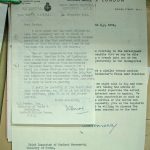 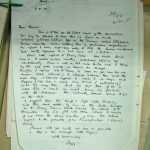 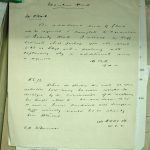 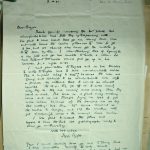 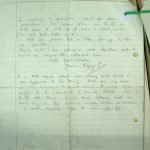 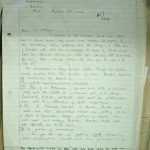 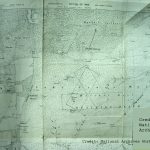 This series of letters in the National Archives detailing the trials and tribulations of attempting to undertake essential excavation work on scheduled monuments in partnership with departments requisitioning land and building essential structures and sites for the war effort. The first few letters from the chief excavator Mrs Cecily Margaret (Known as Peggy) Piggott reveal some of the results of the excavations and detail some of the issues of undertaking archaeology in the New Forest. The last two show some of the discussions going on behind closed doors on the importance of such work. The final paragraph of the last letter firmly state the importance of the work being undertaken and confirm it will continue.

You can read more about Peggy’s excavation results in the Proceedings of the Prehistoric Society available in the library of the New Forest Heritage Centre: Excavation of Fifteen Barrows in the New Forest; 1941-2

The following transcriptions of the letters photographed above from the National Archives (Work.14’1393), if you can make out some of the (ineligible) words then please let us know and we will update the article.

Dear Mr O’Neil
I wonder if this circular which has been sent to Roger means very much and whether he ought to do something about getting into the army. I told him I thought not, but he is anxious to have a statement from an official (source), so will you clarify the position for us? Also will you return the form as he wants to file it?
The excavation is going ahead well. Though we could easily employ twice the number of men. Roughly speaking the results are as follows:-
1.    Lower Bronze Age unaccompanied cremation
2.    Plan of a ‘totenhaus’, square and with a pitched roof and the whole in a square pit 2.5’ deep. (presumably) Early Bronze Age no finds. Will send you photograph  soon and it is obviously of first importance
2(a). A (Mamain?) barrow I think. Small and with Iron Age (carinated) and flat rim pottery which I think is (Mamain?) large portions of wood and iron nail and bronze object. Barrow small and not officially one to be done.
3.    In process of excavation.

So you see we are getting really interesting and informative results and are grateful for you making it possible. Can’t you come sometime? The house plan in Barrow II is still open and will be for one week or so (70 – 40 post holes in it)
Will you please let me hear from you as soon as possible?
Roger and I are getting on well together and it would be impossible without him.
Yours Peggy.

It is still vague about how many and which I am supposed to be doing. There are no more on the (runways) at least 8 more (near) enough to be removed I should think. If so, more labour will be necessary as the area is under water in winter. I really would like to hear from you.

Dear Bryan
Thank you for (removing) the (ineligible) which I’ve always disliked but felt shy of dispensing with. I’m glad to have heard that you are coming down here and will leave the centre of Barrow II open for you to see, and we should also have got the middle of Barrow IV open by then. I was thinking that if Lymington is very full and you are unable to book a room, I’m sure Richard Atkinson would put you up in his caravan for a night or so.
I read your letter to Roger and he has decided to write to (Bright), but to take no immediate action. This is a great relief to me because the men are young and inclined to be insubordinate even with a foreman so without that it would be almost hopeless. As it is they go off at 5 or so nearly every day as they are earning more money than they want or need. This leaves us a great many working hours and we are therefore trying our best to get more labour because (1) the barrows are so big that nothing less than 25’ square removed in the centre is enough, and (2) the weather will get increasingly worse and the evenings dark earlier.
I was glad to (receive) the films and expect to have the first lot of photographs ready to show you on Thursday
With best wishes
Peggy Piggott

Yes I could certainly go out to Stoney Cross, I have been there myself to look around. The clerk of the works on this has just come to live at this place and has the final plans. At the moment unless this alters I have 6 more to do – 10 in all.
(then) there is a separate building site which may mean some more!

p.s. have just lost all the (coupons) for October. Think they were pinched. (But) unless you bring (coupons) – no hope for Stoney Cross

Beaulieu Heath
O’Neil
An additional sum of £300 will be required to complete the excavation at Beaulieu Heath. I attach the rough estimate which prehaps you will send to A.S 22 Rhyl, with a covering note explaining why the additional sum is required. (17.10.41)

A.S.22
When we started this work we were uncertain how many barrows would be destroyed by the construction of the aerodrome, but thought about 5. We now know that 10 and a linear earthwork will disappear. Most (interesting results) have already been obtained

Dear Bryan,
This is to tell you the latest news of the excavations. You may be pleased to hear that we found an amber necklace of Wessex Culture type in the barrow called Coldpixies Cavern near the road – nothing else of particular importance. I’m afraid I have not been able to date the linear earthwork but had expected to – but have cut a section.
Now with regard to Stoney Cross. We shall finish here in 3 weeks unless weather conditions hold us up considerably. There is not a lot more to do and I think by the end of the month we should be through.
Therefore I would like to know as soon as you can let me know what interval is to elapse between this and the next dig. I should suggest a week to 10 days and Roger (who has a week due to him I understand) could be away then. But he says that if it is more than a week he must know his position with the H.M.O.W (Ministry of Works?). He naturally doesn’t want to go on the dole.
I suggest that the stuff is left with Rashley and then sent by him on the date decided on to Stoney Cross – which would be about 8th December. The Stoney Cross job will take about 5 weeks if we have the same number of men. The labour ought to be possible from Fordingbridge I should think.
Please will you write as soon as possible then I can arrange with Roger
With best wishes
Peggy

Dear Jordan
I have asked our Regional Offices to take the necessary action to place in important work the Ancient Monument workman specified in the list enclosed with your letter of 23rd October, and I hope to let you know the results in due course.
One of our inspectors has reported that Messers. Rashley & Co. of Lymington have a contract with your department for the removal of remains from earthworks at Beaulieu Heath, where runways for Royal Air force Station are being laid down. Six labourers are employed on the job, and our inspector has represented that, pressed as we are to find labour for vital contracts, this work is hard to justify.
I shall be grateful if you would look into this matter, or if it is not within your province, pass it on to the proper quarter.
Yours Sincerely
J. O Comont

Dear Mr Comont
Jordan has sent on to me your letter of 20th November (E.M13867/41) in which you refer to the work we are doing at Beaulieu Heath. The construction of areodromes in rural areas in England often involves the complete destruction of pre-historic earthworks which are Ancient Monuments scheduled under the Ancient Monuments Acts. This necessity is unfortunate but unavoidable. We accordingly made arrangements with the Air Ministry that we should be given facilities to excavate the earthworks scientifically, in order to record the evidence they contain of the pre-history of the country before they are flattened out. The Air Ministry are in entire sympathy with our work and we are indebted to them for both facilities and valuable assistance. The work is done in consultation with their Superintending Engineers and is, in our opinion, of very great importance. We could not, and we do not think that instructive opinion would expect us to stand by and see these important memorials of our history destroyed unrecorded.
Yours Sincerely,
A Miller