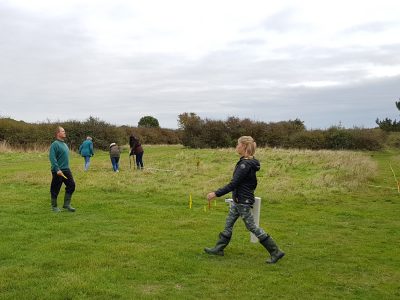 Paul Kelly has been undertaking some targeted geophysical survey as part of LoCATE to try and begin identifying the location of a potential Roman harbour around the Lepe area. This project is supported thanks to funding from the Our Past, Our Future a National Lottery Heritage Funded Landscape Partnership Scheme.

The first phase of his work is reported on here: Lepe Country Park Geophysical Survey Report

The survey was undertaken as a volunteer-led effort, supported by New Forest National Park Archaeology and was made possible due to the kind permission of the Cadland Estate and Lepe Country Park. The equipment was kindly made available through the LoCATE project supported by Bournemouth University.

The purpose of this survey was to identify potential remains of any Roman features in the area, which has seen considerable modern activity such as WW2 defences and preparation for D-Day alongside recent recreational activity as part of the Country Park.

There was evidence of previously identified WW2 AA gun pits at the western end of the area, therefore the survey concentrated on the area to the east. Two linear features were found, also a possible track and hints of what might be an oval feature. One area shows evidence of a square feature, approximately 9m x 9m, with a possible ditch running northwest from this. There was a lot of metal ‘noise’, perhaps caused by WW2 activity and recent recreation. At the eastern end of the area no obvious anomalies were identified. The features identified are interesting and need to be put into context with the area immediately to the north, which has yet to be surveyed.

It seems that some required fields are empty or you have not agreed on licence
LOCATIONS:
Lepe
PERIODS:
Romano British
Modern
SUBJECTS:
Archaeology
Maritime
Military
Our Past Our Future
Pre-WWI
DATA SOURCE:
Contributions
GROUP:
LoCATE