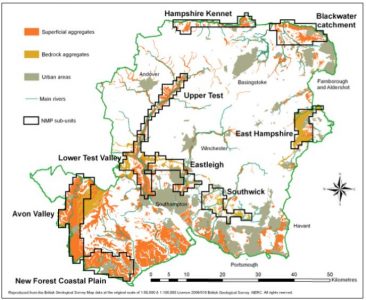 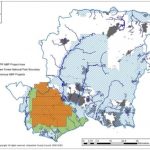 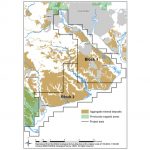 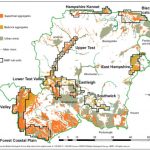 Exploring the map on the home screen you may have discovered the archaeology layers, which includes one called National Mapping, which is split into different periods. This data allows a rapid overview of some of the potential archaeology in the New Forest mapped from historic aerial images and maps. Staff from the National Park and volunteers are using this data along with research and assessment of Lidar to visit potential sites and update the archaeological database for the New Forest.

You can find out more about where the National Mapping data has come from in the following reports:

The Aggregate Landscape of Hampshire 2008

This report details the key findings from the Hampshire ALSF NMP component carried out by staff from the Cornwall County Council between March 2006 and March 2008.  The project contributed to an assessment of potential aggregate producing areas in Hampshire for the Aggregates Levy Sustainability Fund.

This report outlines the results of an archaeological survey, using all available aerial photographs and Environment Agency LiDAR data, of the New Forest and North West Solent coastal plain. The interpretation and mapping was carried out as part of English Heritage’s National Mapping Programme. Historic Environment, Cornwall Council carried out the project between March and December 2009 in partnership with Hampshire County Council’s Environment Department and the New Forest National Park Authority. The project was funded through the Aggregates Levy Sustainability Fund. The principal aim of the project was to define, characterise and analyse the historic environment of the New Forest and North West Solent Coastal Plain. The project achieved this aim by providing significant enhancement to existing baseline data through the mapping, interpretation and recording of almost 800 previously unrecognised archaeological features ranging in date from the Neolithic period to the end of the Second World War.

Covers the following New Forest Areas: New Forest and North West Solent coastal plain running from Hurst spit along to Beaulieu then Calshot and up Southampton Water to Redbridge

The full extent of our historic environment is still unknown. We use remote sensing to identify, record and improve understanding of sites and landscapes across England. Aerial photographs, and the mapping derived from them, should be an intrinsic part of any assessment of the historic environment.From 2011 to 2014 over 14,000 previously unknown sites were added to the historic environment record from Historic England aerial survey projects using National Mapping Programme (NMP) standards. The impact of recent research  is clear in  our wide ranging and exciting NMP projects.
Archaeological research has long benefited from the use of aerial photography, revealing sites that are often difficult or even impossible, to see on the ground. New technologies such as airborne laser scanning usually called lidar, are adding to the toolkit of the aerial surveyor.  Interpretation and mapping of sites brings together information on buried features revealed as seen as cropmarks, soilmarks, or parchmarks or features visible on the surface such as earthworks and structures. The maps and records allow a better understanding of past landscapes to inform research and management strategies.