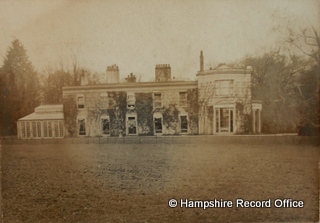 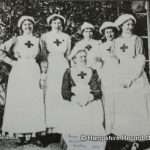 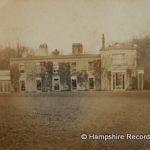 On November 7th 1914, Colonel and Mrs. Heathcote kindly started a Red Cross Hospital in their house, “Beechwood”, Bartley, with 16 beds (the number of beds increased to 20 in 1915).

Mrs. Heathcote acted as Commandant of the Hospital, which was entirely run by V.A. Detachment Hants 26.

Dr. Gurney-Dixon was Medical Officer, whose services were voluntary.  The success in the treatment of nerve cases was very marked.

“Beechwood” and the Heathcote Family

In the late 1850s “Beechwood” became the home of Louisa Malcolm.  Louisa was the daughter of Evelyn John Shirley, M.P. and widow of Neill Malcolm, J.P., 13th of Poltalloch, whom she had married in 1843 (as his second wife) and who had died in 1857.  Her younger sister Selina, Dowager Lady Heathcote inherited the house from her in 1887.  Lady Heathcote lived there with her three unmarried daughters, from 1889 until her death in 1901; she employed the architect William Butterfield to make improvements both to the house and the parish church.

Selina’s son by her husband The Right Honourable Sir William Heathcote, Bart, P.C. (5th Baron of Hursley), inherited “Beechwood” from his mother: Charles George Heathcote was born at 43 Eaton Place, London, on 1 Oct 1843.  A graduate of Oriel College, Oxford (B.A. 1865, M.A. 1870), Charles married Lucy Lyttleton Vachell on 15 May 1884 at Hursley.  “Beechwood” became the Heathcote’s family home in 1901 when Charles and Lucy moved there from Hursley with their five children: one son and four daughters (their second daughter, Sybil Annesley, had died in 1898, aged 12).  Several members of Lucy’s family moved with them: Georgina Vachell, her mother; Horace Annesley Vachell—the author—her brother; and Lydia Vachell, her niece; in 1911 another brother, Guy Courtney Vachell, was also at “Beechwood”.

The Heathcote’s son, George Malcolm Heathcote (a school teacher), was deemed to have enlisted in 1916 due to his civilian work with the British Red Cross.  As Officer Cadet, The Inns of Court Officers Training Corps he was gazetted to Reserve of Officers, 2/Lieut. Coldstream Guards on 5 February 1919.

It seems that some required fields are empty or you have not agreed on licence
LOCATIONS:
Lyndhurst
PERIODS:
Modern
SUBJECTS:
History
Home Front
Hospitals
People
WWI
DATA SOURCE:
Contributions
New Forest Remembers
GROUP:
How We Used To Live – Emery Down Local History Project