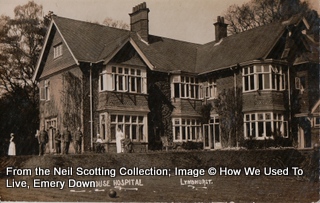 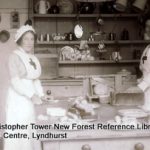 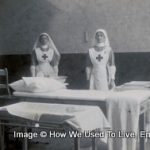 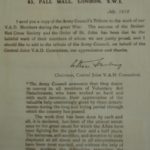 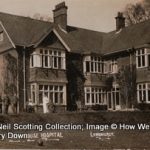 In 1911 the Red Cross had established three detachments of the Voluntary Aid Organisation in the Lyndhurst area.  Mrs. R.G. Hargreaves (of Cuffnells) was the first Vice-President, Miss Chawner (of Forest Bank) was Honorary Secretary and R. MacDonald Esq. (of The Red House) was the Honorary Treasurer.  Three detachments were formed:

From 1915 onwards Mrs. Hargreaves was Commandant of Detachments Hants 112 and 182.

“The Red Cross Local Committee met on Monday January 18th 1915 to discuss matters in connection with the proposed V.A.D. Hospital at Hill House.  It was decided to place the Hospital unreservedly at the disposal of the County Director to be made use of as need may arise for either English or Belgian soldiers.”
New Forest Magazine, February 1915.  (From the archives of the Christopher Tower New Forest Reference Library.)

The Red Cross Detachments were mobilised in 1915, and undertook to equip and run Hill House Hospital, Lyndhurst, which was generously handed over with a nominal rent by Canon Oldfield and his family.

Equipment was given or lent, by the residents of Lyndhurst, and the hospital was opened on 24th March 1915, with 23 beds.

The Hospital was run by a Committee of Management, with Colonel C. Heathcote, of “Beechwood”, Bartley, as Chairman.

Patients were received from the Royal Victoria Hospital, Netley, for the first six months, and later from the New Zealand General Hospital at Brockenhurst.

A Ward was reserved for Canadian and Portugese wood-cutters employed in the Forest, and for soldiers from the Bombing and Trench Mortar Schools established in Lyndhurst.

Above text (excepting the extract from the New Forest Magazine): from Hampshire Record Office: 173A12/A1/2/1 and 173A12/A4/2/2/1 (transferred by the British Red Cross from the Balfour Museum of Red Cross History in Hampshire).  Used with permission.

“HILL HOUSE HOSPITAL.  In consequence of the removal of the New Zealand patients owing to the opening of a Convalescent department in connection with the Brockenhurst Hospitals, the Committee of Hill House decided, after consultation with the County Director, to close the Hospital, but not to dismantle the building before October, so as to be able to re-open if required.  During the three years the Hospital was in existence over 1000 patients have been treated there and the Committee have received grateful letters from the N.Z. General Hospital Brockenhurst and the Bombing School, Southern Command, and the Heads of the Canadian  and Portuguese Lumber Camps in acknowledgement of the care and attention given to patients.”
New Forest Magazine, September 1918.  (From the archives of the Christopher Tower New Forest Reference Library.)

It seems that some required fields are empty or you have not agreed on licence
LOCATIONS:
Lyndhurst
PERIODS:
Modern
SUBJECTS:
History
Home Front
Hospitals
People
WWI
DATA SOURCE:
Contributions
New Forest Remembers
GROUP:
How We Used To Live – Emery Down Local History Project