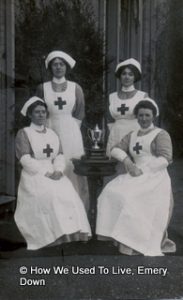 Miss Powell’s cup was won by Hants 112 (pictured above). From L-R, the first nurse is not named— please can you help us to identify her? The others are named as Miss Madge Acheson [sic], Miss [sic] Dolly Mills and Miss Annie Blake. 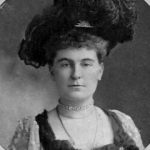 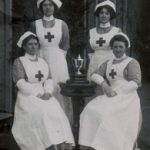 During The Great War a cup was given by Miss Mary Grace Powell (of Brooklands) for Competition between the Voluntary Aid Detachments (VADs) in the Lyndhurst area.

Miss Constance Margaret Aitchison who was the daughter of Rear-Admiral Henry Compton Aitchison and Constance Fanny Lushington of Rosiere (who married in 1889).  Through her mother Madge was the great-granddaughter of the 17th Earl of Erroll.  Born in 1891, Madge was brought up at Shrubbs Hill.  At the time of the 1911 census Madge was staying with her great-uncle—Francis Compton Esq. M.A., D.C.L., D.L., J.P., at Blackwater House.  After The Great War Madge continued her voluntary work and joined the Auxiliary Territorial Service shortly after it was formed in Sep 1938.  Madge held the rank of Company Assistant (8 Nov 1938) and Subaltern (30 May 1941); in World War Two her ATS number was 192409.  Madge moved from Lyndhurst to live in Romsey in the mid-1960s.  She was a keen golfer.

Mrs. Dolly Mills—Dorothy Lily E Witt married Harry Albert Mills in 1915, when she was 18 years old.  Dolly, born in Poole, Dorset, grew up in Basingstoke where her father was a butcher.  Harry’s father, Edward Boyes Mills was a gardener at Park Hill, and Harry’s brother, Charles Edward, was the gardener at Holmfield.  Harry’s eldest sister, Rose Martha, married William Herbert Nicholls who died on 22 July 1917 in Mesopotamia.  Harry and Dolly became Landlord and Landlady of the Crown and Stirrup Inn, Clayhill.  Dolly excelled at flower arranging.

Miss Annie Blake was the youngest daughter of Moses and Elizabeth Blake of Merton Cottage, Silver Street — Moses was the Parish Clerk and Sexton, Emery Down Church.  Aged 16, Annie started work in domestic service locally, in London and Dorset.  She worked her way up from Scullery Maid to Cook and attended Mrs. Marshall’s School of Cookery.  Upon returning to the Forest, Annie worked for the Dalrymple family at Bartley Lodge and then for Miss Powell at Brooklands.  During The Great War Annie continued to work for Miss Powell whilst also cooking at Hill House for the Red Cross.  In 1920 Annie left Miss Powell’s employment to marry Frank Broomfield, a widower; they lived at Lilac Cottage, Bank with Frank’s daughter, Elizabeth.

And one other auxiliary nurse – unnamed on the back of the photograph – can you help us to identify her please?

Miss Mary Grace Powell (1867-1958) was the daughter of Lieut.-Colonel William Martin Powell, she lived at Shrubbs Hill and then Brooklands, Lyndhurst—where she took over the running of her father’s household when her mother died.

Her younger brother, Edward Weyland Martin Powell, fought in the Boer War and was awarded the DSO (1901).  On the Reserve of Officers when WW1 broke out: Major Powell served in the Royal Field Artillery, was mentioned in dispatches, created a CMG (1918), a CB (1919), and awarded the Legion of Honour.  He was given the Brevet of Lieut.-Colonel, Reserve of Officers, 1 January 1917, and the honorary rank of Brigadier-General on 26 February 1919.

Brooklands became the Brigadier-General’s home, so in her later years Grace Powell lived in Pennington, in a house she named “Brooklands”; she died in the Fenwick Hospital on 14 July 1958.