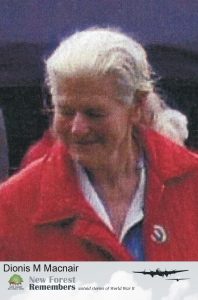 Dionis Macnair was born in Burley in 1930. Whilst returning from abroad they stopped off in Gibraltar at the time war was declared and had to be evacuated from there at short notice when France was invaded. The boat they were on was supposed to land them at Portsmouth, but due to bombing, they eventually landed at Tilbury in London. She remembers the effects of the blackout there before they travelled to stay with a grandmother in Wales where they spent the summer of 1940 before returning to Burley in the autumn of that year.  Dionis provides quite a lot of detail regarding life in that part of the Forest during the war including their social activities, mixing with the troops and the blackout. She recalls the restriction of movement due to petrol rationing and her mother joining the Voluntary Aid Detachment.
She also recalls the Forest being full of troops and tank manoeuvres and the build up to D-Day. She remembers the trees being felled for timber (primarily by Italian POWs) and ploughing up the Forest to try to grow food and the long term affect it had on the areas involved. Like most people, they kept pigs and she recalls collecting pig swill and the black market in pig meat. Apparently there was a considerable reduction in the number of deer on the Forest as well! They had evacuees billeted on them and Dionis remembers food rationing and what they had to grow themselves, including preserving fruit and vegetables.
Dionis also mentions the collection of blood from the ponies in order to create the vital tetanus vaccine for the injured troops. From Burley they could see the bombing of Southampton and recalls bombs being dropped in the Forest. Dionis also mentions cycling during the blackout and the dangers of slit trenches hidden by the heather whilst out riding their ponies.