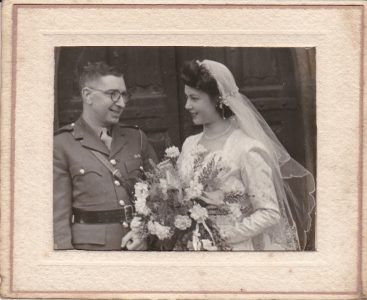 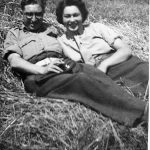 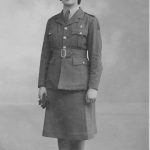 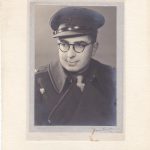 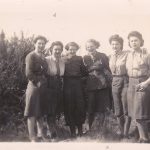 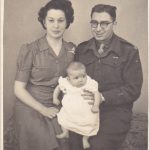 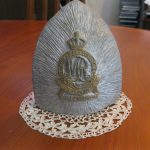 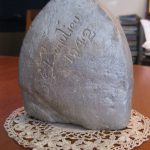 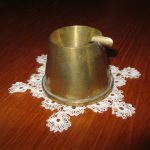 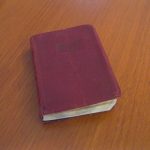 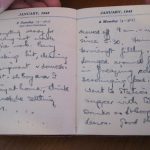 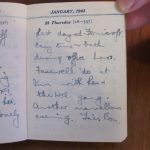 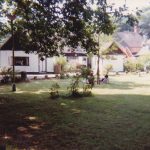 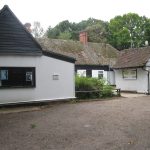 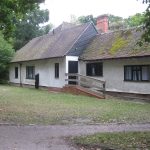 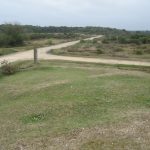 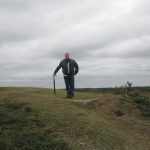 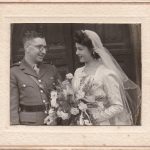 Directly south of the gun emplacements, on the other (south) side of the main road from Beaulieu Road railway station to Applemore, was the battery HQ, where Marjorie worked as the battery secretary. This was based in a building known as ‘The Bungalow’ at Ferny Crofts.

There is some doubt as to the correct identification of ‘The Bungalow’. A historical pamphlet published by Ferny Crofts Scout Activity Centre suggests the building was scheduled for demolition circa 1982, but this seems not to have been the case. In the Centre publication, the building identified as the ‘Pack Holiday Centre’ due for demolition is noted as possibly being ‘The Bungalow’ – but earlier in the pamphlet the Pack Holiday Centre is referred to with more certainty as ‘the tin hut’.

Marjorie had always described ‘The Bungalow’ as just that, and while visiting Ferny Crofts in 1982 she identified and photographed the building in which she worked in 1943. Similar photos taken by Jeremy Isaac in 2013 show it to be the same building that is used today. It seems the ‘tin hut’ mentioned in the Scout publication, although large, may have been confused with what the pamphlet refers to as ‘the main building’.

Furthermore, Abbott’s The Hadley Guns (2002) also includes a picture of the main building which is clearly the same one photographed by Marjorie Isaac née Readman in 1982 and Jeremy Isaac in 2013. Therefore the Pack Holiday Centre demolished circa 1982 must be presumed to have been ‘the tin hut’, while the main building at today’s Ferny Crofts Scout Activity Centre can be presumed to be ‘The Bungalow’.

Leslie Isaac
My father Henry Hammond Leslie Isaac was born on 14 April 1909 in Mitcham, Surrey, where he was brought up. He started work in the City of London in the 1920s where he worked for a leading insurance company. By the summer of 1939 it was clear to Leslie that there would be a war with Germany, which prompted him to join the St Mary’s Regiment of the Surrey Yeomanry. After basic training and a number of postings, Leslie was sent to Eritrea in northeast Africa to fight in the Italian campaign. He was seriously wounded by friendly fire in 1941, and of four injured soldiers sent by ambulance across the desert for medical treatment, Leslie was the only one alive on arrival several days later at the field hospital. After a period of recuperation in South Africa he returned to the UK sometime in 1942, the African/Italian campaign being over, and rejoined his unit which had been posted to the Heavy Anti-Aircraft Battery at Yew Tree Heath near Beaulieu. It was here that he would meet Marjorie the following year. Artifacts retained by Leslie from his time at Yew Tree Heath include a gold-and-silver painted chalk carving of the St Mary’s regimental insignia crafted by a battery colleague and bearing the inscription ‘Beaulieu 1942’ on the reverse, and an ashtray made by another colleague from a brass artillery shell casing.

Marjorie Readman
My mother Marjorie Readman was born on 7 July 1923 in Grimsby, Lincolnshire. On leaving school in 1939 at the age of 16, she worked as a typist/secretary for a legal firm in the town, also taking her turn at firewatching duty from the roof of the company’s office building, as World War II had already started and Grimsby docks were a major target for German heavy bombers.

In January 1942 Marjorie joined the ATS and after completing basic training, was posted a year later to the Heavy Anti-Aircraft Battery at Yew Tree Heath near Beaulieu, where she worked as the battery secretary based at the battery HQ in a building known as ‘The Bungalow’ at Ferny Crofts. Leslie had already arrived at Yew Tree Heath some time the previous year.

It is not known where Marjorie was stationed prior to her arrival in Beaulieu, but her diary entry for Monday 4 January 1943 describes her move to the new posting. “Moved off 9am – up since 5.30. Found Fernicroft (sic) filthy. Lounged around fire in freezing cold scrounging food.” Conditions at Ferny Crofts were primitive to say the least: “Quite a busy day in office,” her diary continues the following day. “No light or water so had to wash in snow. Hurricane lanterns only so all retired immediately after tea. Still snowing.” However, things had improved by Wednesday 6 January: “Light and water started – thank the Lord.”

Marjorie’s diary reveals that, in addition to her official duties as battery secretary, she also engaged in a range of other more mundane activities such as maintaining her kit and cleaning fire grates. Having by now met Leslie, she accompanied him to dances and cinema screenings in Lyndhurst and Southampton as well as meeting him frequently in the NAAFI, but her diary gives very little detail of life on the base, possibly for security reasons.

Marjorie’s diary omits the fact that, like all staff at the battery, she had to take her turn on the anti-aircraft guns during air raids on nearby Southampton and Portsmouth, when she operated a photographic device known as a Kine-Theodolite, the shutter of which was synchronised to take pictures simultaneously with the flashes made by the guns firing. This was to improve the battery’s accuracy.

Marjorie did not stay at Yew Tree Heath very long. Barely a month after her arrival, the unit was moved to Fareham near Portsmouth, where she spent the remaining 18 months of her ATS service. On Thursday 28 January 1943 her diary records: “Last day at Fernicroft. Farewell ‘do’ at Inn with Les and the HQ gang.”

Life After Yew Tree Heath and Ferny Crofts
On 29 April 1944, Marjorie married Second Lieutenant HHL Isaac at St Mary’s parish church in Beddington, Surrey, the home of the groom’s parents. The couple had hoped to honeymoon at one of the south coast resorts, but these were all out of bounds due to preparations for the approaching D-Day invasion, and they instead obtained a weekend pass to Windsor. The ATS Record Office in Winchester recorded that Marjorie Isaac was discharged from the ATS on 12 July 1944 for ‘Family Reasons’, and she welcomed her first son Peter on 25 January 1945. Leslie was still in the services.

After the end of World War II Leslie and Marjorie settled down to family life in Coulsdon, Surrey, he returning to his job in insurance in the City, she working as a wife, mother and homemaker. Their second child Jeremy was born on 12 April 1958, and in 1966 Marjorie enrolled for teacher training at London’s Southlands College, graduating in 1969 and teaching school at primary level until she and Leslie retired to Bexhill-on-Sea in Sussex in 1979.

The anti-aircraft camp on Yew Tree Heath appears to have been dismantled and the guns removed by 1946, although the buildings were still standing (Abbott reports squatters living at the camp in 1947, which the Beaulieu Record corroborates). However, the remains of the camp were removed some time afterwards, and nothing but earthworks and concrete hard standing remained when Leslie, Marjorie and their younger son Jeremy, by now 10 years old, visited while holidaying in the New Forest in 1968. Jeremy clearly recalls the nostalgic visit to the camp as his parents pointed out the sites of the Command Post and gun pits.

Leslie Isaac passed away on 11 August 1981 aged 72 at the old Conquest Hospital in Hastings. The following year Marjorie made a nostalgic trip to Southampton and Beaulieu and visited Yew Tree Heath and Ferny Crofts, which was by then used as a Scout Activity Centre. She recognised and photographed the building she knew as ‘the Bungalow’ from 40 years previously.

Now a grandmother, Marjorie Isaac née Readman passed away on 17 October 2009 at St Michael’s Hospice in St Leonards aged 86, having spent a long and enjoyable retirement with her many friends in Bexhill-on-Sea. She always recalled her two and a half years in the ATS as the most formative and influential of her life, and had a special affection for Beaulieu where she first met Leslie, to whom she had remained married for 37 years.

In September 2013, Jeremy Isaac visited Yew Tree Heath and Ferny Crofts where his parents had met 70 years previously and  took a number of photographs of the Command Centre/gun pits earthworks – and, of course, ‘The Bungalow’.