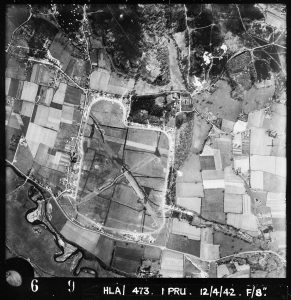 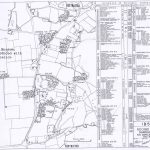 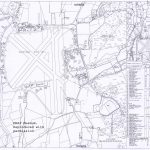 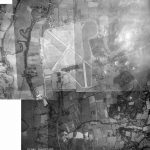 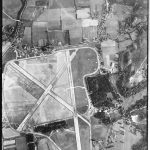 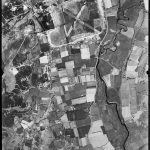 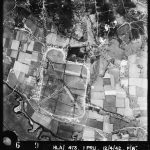 A 1946 RAF aerial image of Ibsley Airfield and 1946 asset plan of the site compiled by the Air Ministry Works Directorate in preperation for closing and returning the site to original landowners.

Construction of an airfield at Ibsley first began in 1940. The airfield was originally meant to act as a satellite station of RAF Middle Wallop but eventually became a Fighter Command station in its own right – it became the only fighter base with concrete runways in the entire Avon Valley. Ibsley was pressed into service in February 1941 (even though construction would last another eight months) and was home to 19 different RAF fighter squadrons for the next three years. At some point it was used as a location for the film First of the Few (released in September 1942), and the actor David Niven filmed several scenes here

USAAF units began to arrive in 1942, but the airfield did not become an exclusive US base until 1944. Ibsley was used by American Close Support squadrons between April and July, but upon their departure, it was returned to the RAF. Thereafter it was used by RAF Training Command, then RAF Transport Command. It was formally closed in 1947.

Ibsley’s dispersed sites were used in the early 1950s to accommodate personnel from RAF Sopley. At the same time Lord Normanton, the landowner, turned Ibsley into a motor racing venue. Notable racer John Surtees may have made his racing debut at the circuit. The circuit closed in 1955 and the runways were lifted in the 1960s. Shortly afterwards, the entire site became an aggregate quarry. The great pits have now been flooded and are owned by the local water authority and used as a nature reserve and activities centre.

Very little of the actual airfield remains today and the outlines of the runways (visible at all other concrete runway sites in the New Forest area) are not discernible. However, there are several structures still extant, including the only remaining example of a World War II control tower in the study area. Modern aerial photography suggests that many of the dispersed sites are still extant and may, in some instances, be occupied by original buildings. Several air raid shelters built at the north and south ends of the runways still survive, as does a Battle Headquarters on the heathland immediately east of the airfield.

Here are some links to other articles on the Portal connected with the Ibsley airbase.