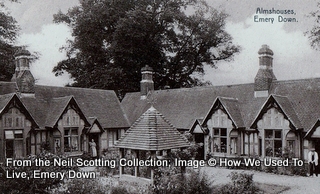 Emery Down Almshouses where Mrs. Ballard lived during The Great War
Author: How We Used To Live

The whole Empire was involved in the war effort.  Requests for war-time comforts came directly from fighting units or were gathered by individuals or charities set up for the purpose.  The list of items needed, an example of which is shown below, gives distressing evidence of the human cost of the struggle – and of a country very different from the one in which we live:-

The above list was compiled from a Hampshire organisation’s ledger, Hampshire Record Office, W/C2/3/2.

“Our [Emery Down] School Children have made 51 pairs of mittens and 18 shirts which were sent to our soldiers at the front, and collected amongst themselves 11s. 7d. for the Daily Telegraph Belgian Fund.  25 articles made at the Vicarage have been forwarded to the soldiers at the Front”.  February 1915.

“Lyndhurst Work Party.  This Work Party began on August 10th, and was wound up on February 25th.  A sum of £154 10s. 8d. has been contributed by over 280 subscribers.  It has sent 692 garments (including pairs of socks) to the Hospital Ships at Netley, and has allotted 282 garments (including socks) to regulars going to the Front, and to the recruits of Lord Kitchener’s Army …”.  April 1915.

“Mrs Ballard (Emery Down) has sent Miss Chawner* one hundred pairs of beautifully knitted socks and forty-nine pairs of mittens since the beginning of the war.  This is certainly a record for the district when it is remembered that the knitter is over 80 years of age.  Mrs Ballard intends to continue her good work ‘for the duration of the war’.”  March 1916  [*Miss Chawner lived at Forest Bank, Lyndhurst.]

“The Lyndhurst and Emery Down band of knitters still carry on faithfully.  This year, in addition to mufflers for the Navy, we have sent fifty pairs of socks to Col. Boteler, DSO, RA, for his Ammunition Column, fifty pairs to the Hampshire Depot, twenty five pairs to the ‘Westminster Gazette Comforts for Fighting Men’ and twenty five pairs to the French Wounded Emergency Fund.  … Mrs Ballard is still one of the most regular and energetic workers and must soon have another 100 pairs to her credit.”  February 1918

“Mrs Ballard, Emery Down, has now knitted 200 pairs of socks for Soldiers and Sailors.  Considering her advanced age this is really a great achievement and, if not altogether a record, must approach very nearly to one.”  October 1918

Who was Mrs. Ballard?