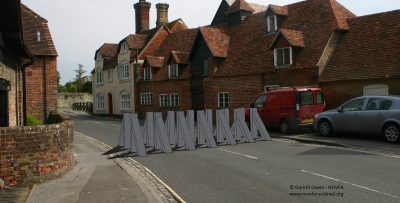 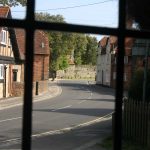 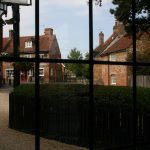 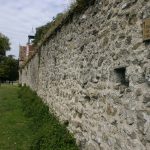 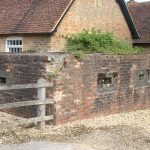 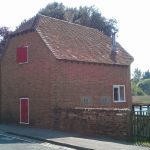 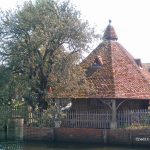 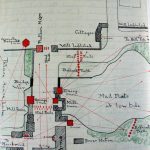 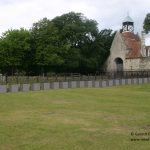 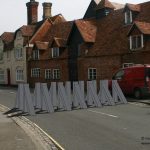 Anti-Tank islands were defensive points, usually centred on major road junctions, bridges or natural features that, if obstructed, would delay the advance of German forces, giving time for Allied reinforcements to move to the area. These sites were usually made up of bunkers, roadblocks, trenches and, in the event of a withdrawal being necessary, explosives that could be used to demolish a bridge or road altogether. Beaulieu is recorded as a Nodal Point in war diary research (WO 166/14506) and as an Anti-Tank Island (amended to Road Block) in the personal papers of Lt. Col. Sir Morgan Crofton 2nd in Command of the Home Guard’s 9th Forest Battalion.

A hand drawn map (Pencil sketch of Beaulieu Anti-Tank Island) included in these papers identifies two steel rail roadblocks that have also been identified in war diary research (WO166/1319) and in aerial photography taken by the RAF in 1946, five pillboxes, a row of ‘Elephants Teeth’ (most likely anti-tank blocks) and numerous firing positions from local buildings and a loopholed wall at Beaulieu Abbey.

Sir Crofton’s notes, in the Scrap book, on Beaulieu Platoon in Beaulieu Village
Garrison of 44 men distributed between 5 block houses (3 men a piece) and several small observation posts watching roads from the undergrowth near Palace House, with M.G posts hidden in undergrowth round the lake. The balance of men being retained as a general reserve, and to supply a small post at the top of Harlech Hill watching towards Hatchet Gate from which high ground it is possible to watch all the heights surrounding Beaulieu, which lies in a hollow.

What Survives today?
Steel rail roadblocks required holes to be dug into the tarmac which would presumably remain. However, resurfacing work may have obliterated them. Of the five bunkers identified, two are historic listed buildings (the Dairy and the Mill, although not designated on their World War II heritage) one is inside the garage building opposite the mill, one is behind the mill and the fifth does not appear to survive (if it was ever built). You will also be able to see an date on the bridge cast in iron ‘1943’ this was when the bridge was widened in the build up to D Day.

Like the anti-tank island at Breamore, the site at Beaulieu is extremely concentrated on a very small area and provides an excellent example of how buildings were modified and added to in order to create defensive sites.