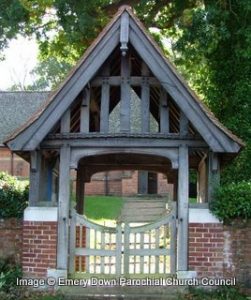 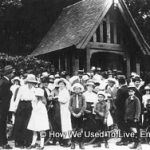 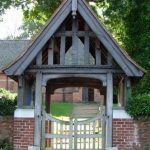 The 22 names inscribed in memory of those who fell in The Great War are:

The 4 names inscribed in memory of those who died in World War Two are:

About the Lych Gate

Initially the vicar and churchwardens had decided not to have a war memorial in the ecclesiastical parish of Christ Church, Emery Down and that the names of those who had died in the Great War should be inscribed on the proposed war memorial for the civil parish of Lyndhurst.  Local opinion must have swayed this decision as by December 1919 subscriptions had begun to be received.

The story continues in the following extracts from the New Forest Magazine [from the archives of the Christopher Tower New Forest Reference Library at the New Forest Centre in Lyndhurst]:

“After some discussion regarding the Lych Gate, but without coming to any definite decision except to deplore the delay and the continued postponement of the work owing to the illness of both the Architect and the Builder.”  March 1921.

“We are glad to be able to state that the Lych Gate, our War Memorial, has at length been begun, and we hope that by the time these words appear in print it will be nearing completion.”  May 1921.

“The Unveiling and Dedication of the Lych Gate in Memory of the Men of Emery Down who died in the Great War will take place on Sunday the 17th of July at 3 p.m.”  July 1921.

“The account of the unveiling and dedication of the Lych Gate in memory of those from this village who died in the Great War will be given in our next issue.  It may, however, here be mentioned that the churchyard wall which was in a very dilapidated condition has been repaired at a cost of £11, and the east gate has been painted.”  August 1921.

“The Unveiling and Dedication of the Lych Gate in memory of the men of Emery Down, Bank and Gritnam who died in the Great War took place on Sunday, July 17th at 3pm.
“The first part of the service was held in the Church, and the latter part at the Lych Gate.  An appropriate address was given by the Rev. A.C. Crick, Vicar of Pennington, who took for his text Psalm 118, 20 “This is the Gate of the Lord; the righteous shall enter into it”.  He spoke of the Gate of Baptism, the Gate of Repentance, the Gate of Confirmation, the Gate of Holy Communion and the Gate of Death, through which our brave soldiers had passed to glory.  The Unveiling Ceremony was performed by Mr. Hargreaves, who lost two sons in the war, and as he said the words: “In proud and loving memory of the men of this Parish who fell in the Great War, I unveil this Lych Gate,” the deepest sympathy was felt for him in the performance of a task at once so painful, so affecting and so nobly undertaken.  The words of Dedication were read by the Rev. C.H. Compton, Rector of Lyndhurst, and the names of the fallen, 21 [sic] in number, were read by Capt. Trinder.  As the Voluntary, Miss Lucas, our Organist, played effectively “These are they that came out of great tribulation.”  The singing of the hymns, two of them unaccompanied, was well rendered by the choir reinforced by the presence of Messrs. E. Whitehorn, T. Whitehorn, F. Veal and W. Whitehorn.
“The Church was filled to its utmost capacity and there were as many outside Church as in it.
“Many beautiful wreaths were placed in and about the Lych Gate.
“We much regret that the Architect, Mr. Horseman, who with much taste and feeling designed the Lych Gate, was prevented by continued illness from being present.”  September 1921.

“The Lych Gate account was submitted [to the Parochial Council on the 6th of October] as follows:

(i) That Oak seats according to the original design shall be made, estimated to cost £5; (ii) that the names of the fallen should be filled in with black cement, estimated to cost £3; (iii) that the following inscription should be put on the front beam: “Lest we forget” (1914-1918); (iv) that two hurricane lamps should be bought which could be hung on hooks on dark nights and which could be easily detached.”  November 1921.

“The paving of the lych-gate and the draining of the path from the lych-gate to the church have been carried out at a cost of £17 3s. 6d., towards which a generous friend anonymously gave £16.  We are very grateful for this act of generosity.  The work in connection with the lych-gate may now be regarded as finished.  May it ever be regarded as a worthy memorial to those to whom we owe more than we can say.”  February 1922.

In the April 1922 issue of the New Forest Magazine, it was revealed upon the death of Colonel Leathem, a long-term resident of Emery Down, that he had been the anonymous donor.  With regard to his generosity, the report states ‘On several occasions the Vicar was reluctant to take the money offered as he felt the Colonel was giving more than his fair share.  But he always replied, “I must do it.  It is my way of showing how greatly I appreciate living in this beautiful forest.”

Nota Bene – Sadly documents in Hampshire Record Office (Ref. HRO 143M83 PB4) show that there was considerable, sometimes acrimonious correspondence, 1920-1922, about the cost of the work and the payment of the bills.

It seems that some required fields are empty or you have not agreed on licence
LOCATIONS:
Emery Down
PERIODS:
Modern
SUBJECTS:
History
Memorial
Military
People
WWI
WWII
DATA SOURCE:
Contributions
New Forest Remembers
GROUP:
How We Used To Live – Emery Down Local History Project