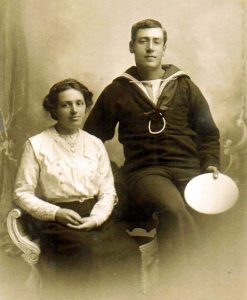 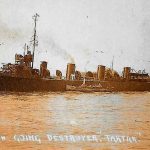 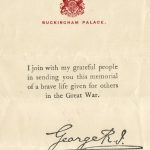 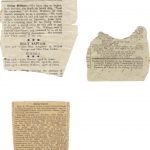 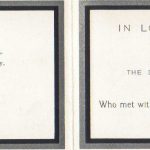 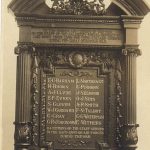 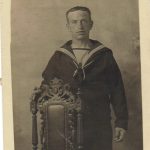 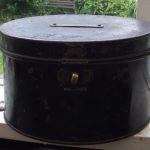 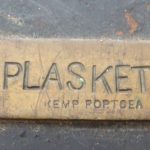 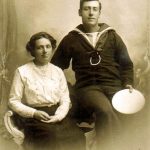 Ernest Withers was born in Aldershot.  He was postman in Redlynch who married Alice Plaskett in 1912.  Records indicate that he joined the Royal Navy in January 1917 and joined the Victory 1, a shore based naval establishment in Portsmouth.  He served as an ordinary seaman on HMS Tartar, joining the ship on 6 June 1917, a photo of the Tartar is shown.

He died on 17 June 1917, aged twenty-nine, in a mine explosion in the Straits of Dover.  Ernest was buried in St Mary’s Churchyard on 23 June 1917.  For serving overseas Ernest was awarded the British War Medal and the Victory Medal.  His widow Alice received his watch, and a letter from Buckingham Palace, a copy of which is shown.  This was a standard letter sent to the family of all those who gave their lives in the service of their country.

His older brother William, who lived in Aldershot, had also been killed in action on 17 September 1914 in France.  He was a Private with the 1st Battalion the Queen’s (Royal West Surry Regiment).  A second brother, Sydney, one of a twin, joined the Victory 1 on 8 March 1916.  Sydney survived the War.

Ernest was commemorated on the memorial that was at the Post Office in Salisbury (whereabouts currently unknown), but a photo of which is shown here.  News of Ernest’s death was recorded in the local papers, copies of which are shown.

William George Plaskett was born in 1882, and in 1911 was recorded in the census as being a farm labourer.  William was enlisted into the 1st Battalion Dorset Regiment, before joining the 15th Battalion King’s Own Yorkshire Light Infantry.  It is said he was gassed during the War, and this may have been why he transferred from one regiment to another.  It is likely he was sent home wounded, but was deemed fit enough for frontline service.  William survived the war, and lived to be eighty-seven years old.  He is buried in Redlynch Churchyard.

Jack Plaskett was born in 1885.  He was a farm labourer in 1911 and enlisted on 15 August 1916 in the Royal Navy, surviving the War.  His large heavy trunk was delivered by train to Downton Railway Station and then carried by horse and cart to Redlynch.  He later married, and lived in Downton.  Jack died in September 1958, and is buried in Barford Lane Cemetery.

A photograph of Jack and his naval hat box is shown.

Ernest was born in 1890, and in 1911 was recorded as being a house carpenter.  Information provided states he served as a stretcher-bearer in the War and survived.  Although, research has suggested he served with the Army Ordnance Corps.  He died in 1971, and is buried in Eversley Churchyard, Basingstoke.

The son of Sidney and Sarah, Styles Crook was born in Southampton in 1878.  He married Emily Jane Plaskett towards the end of 1905.  Styles and Emily had seven children, George, William, Frederick, Albert, Nelson, Leonard, Stanley and Beatrice.  Before the war he was an assurance agent with the Prudential living in Warminster, but by 1927, Kelly’s Directory shows him to be a boot and shoe repairer.

Styles enlisted on 24 August 1914, and was one of Kitchener’s volunteers.  He joined 5th (Service) Battalion Wiltshire Regiment, and was based in England until 1 July 1915 when he set sail for the Mediterranean, arriving at Gallipoli on 17 July.  It would appear that Styles spent a week in the trenches before spending a further out of the trenches before he was involved in the Battle of Sari Bair.  The 5/Wilts were involved in the action at ANZAC Cove, it was here that Styles sustained a serious leg injury which resulted in one leg being shorter than the other, this meant he had to wear a built-up shoe.  As a consequence of this injury Styles was discharged from the army on 29 March 1916.  At the time of his discharge he had attained the rank of sergeant.  Two of his sons, Frederick and Leonard were killed in the Second World War.

[i] Some of the information on Ernest Withers was provided by Beatrice Harrison.  Her uncles were William, John and Ernest Plaskett.  Her Aunt Alice was married to Ernest Withers.  Her father was Styles William Crook. These men were all related and lived in Redlynch or Morgan’s Vale.