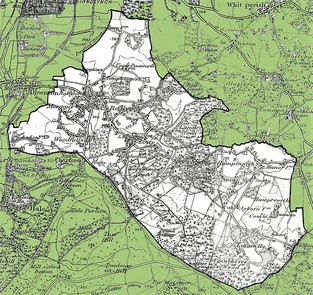 The Parish of Redlynch, Wiltshire

The present Civil Parish of Redlynch, formed in 1934, includes Morgan’s Vale, Woodfalls, Lover, Hamptworth, Nomansland and Redlynch itself. It is situated approximately 8 miles south-east of Salisbury and much of it lies within the northern boundary of the New Forest National Park. In 2011 the population was 3,448

However, in 1914 the villages were not combined. Redlynch was already a Civil Parish, having been separated from Downton in 1896. The population, according to the 1911 census, was 1,299 plus 17 from Langley Wood. Morgan’s Vale and Woodfalls were still under the Parish of Downton and the population figures were not given separately, although the total for those areas, extracted from the 1911 census for Downton, is about 547. We know that by 1921 this figure had risen to 572. Nomansland had been made a Civil Parish by the extra-Parochial Act of 1857. In 1911 the population was 127 and in 1921 it was 131. Thus the total population for the combined villages was 1,990 in 1911 and 1,933 in 1921.

These figures were calculated as follows: –

The whole area was a rural community with woodland and farms; ponies from the New Forest were often seen wandering around the village. However there were also some industries, including brickworks, sawmills and an iron works. There were very few unemployed persons according to the 1911 census.

An increase in trades and industries had led to a growth in settlement in the late 19th century. In Redlynch the main development was through the village from the King’s Head to Harthill Drove and also at the other end of the village in the area known as Lover, which included Besomer Drove, Whiteshoot and Black Lane. In Morgan’s Vale there were properties in Orchard Road and Apple Tree Road as well as along the Vale to the Tower House. The main development in Woodfalls was along Slab Lane, with a few houses in Vale Road and along the Ridge.

There were also Estates such as Redlynch House, Paccombe, Trafalgar Park, Hale Park, Newhouse, Hamptworth Lodge and Lyburn Park, some of which owned land and property in the area and provided employment.

The Parish had three schools, two churches, five chapels, at least 16 shops, two reading rooms and a number of Public Houses. There was no mains water, drainage, electricity or gas until well into the 20th century.

Many roads were of gravel with wide verges. Some were listed as ‘Private Roads’ and did not have their present day names. Transport was limited. The main route to Salisbury, approximately 8 miles away, passed through Downton. The Downton, London and South-West Railway, which opened in 1866, was close-by.

N.B. In our project ‘Redlynch 1914 – 1918’ we have included all the areas of the present day Parish, as we were commemorating all those who served.

It seems that some required fields are empty or you have not agreed on licence
LOCATIONS:
Redlynch
PERIODS:
Modern
SUBJECTS:
Archives and Libraries
Diaries
History
People
WWI
DATA SOURCE:
Contributions
New Forest Remembers