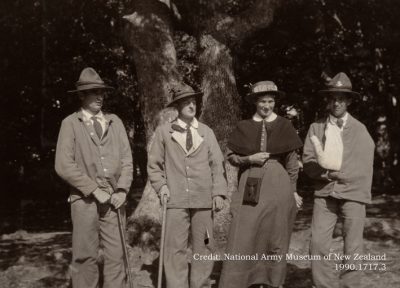 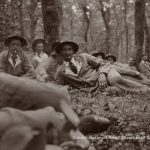 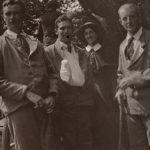 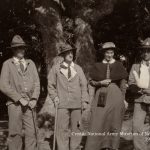 A set of photos taken by 22/318 Staff Nurse Elfrida Anne Parkinson depict a day visit of convalescing New Zealand soldiers based at No1 New Zealand General Hospital in Brockenhurst to the Rufus Stone.

The Rufus Stone is a monument that helps illustrates the origins of the New Forest. The iron-clad stone marks the (alleged) spot where King William II was fatally wounded with an arrow, during a royal hunting outing in the Forest, in the year 1100AD. The king was nicknamed Rufus, apparently because of his ruddy complexion and red hair, and was the son of King William I who was responsible for designating the area as the royal hunting ground ‘nova foresta’ that we know today as the New Forest.

In 1916, the temporary military hospital established in Brockenhurst in 1914 to treat Indian service personnel who had been injured while serving in France, was taken over by the New Zealand authorities and became No 1 New Zealand General Hospital.   It was one of three general hospitals in the UK which were staffed and operated by the New Zealand Medical Corps to care for wounded members of the New Zealand Expeditionary Force.

The hospital consisted of a main tented and hutted section, known as “Tin Town” located at what is now Tile Barn Outdoor Centre, together with minor medical sections at Balmer Lawns and Forest Park and several auxiliary hospitals in and around Brockenhurst.

It appears that Elfrida Anne Parkinson was based at Balmer Lawn as this is where most of her photos were taken.

There are another set of photos from a day trip and picnic to Milford on Sea: Here

You can find out more about the New Zealand General Hospital and its satellite sites: Here