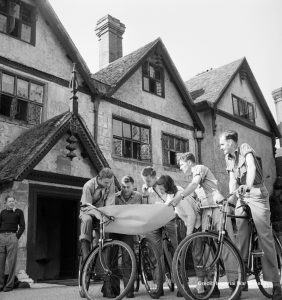 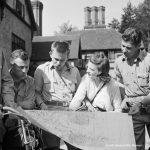 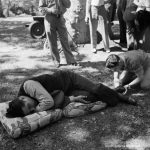 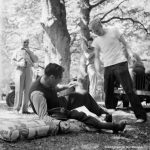 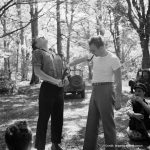 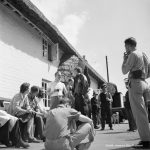 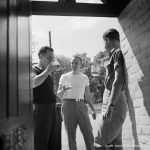 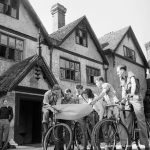 This series of photos from the Imperial War Museum start with the residents deciding to go for a picnic in the New Forest. It is decided half the group will cycle and half the group will travel by jeep, and they will swap over for the return journey. The cyclists check the route on a map in the sunshine before they set off from the grounds of the large country house. Left to right, they are: Captain R W Smith (from Pomona, California), Lieutenant J D Baird (from Suring, Wisconsin), Miss Kathleen Deane (from Connecticut and one of the American Red Cross hostesses working at the club) and Lieutenant E T Broadnax (from Bastrup, Louisiana).

During their picnic in the New Forest the airmen play numerous pranks on each other. In the first one Lieutenant ‘Judy’ Judas falls victim to a practical joke. Having been challenged to drop a penny from his forehead into his trousers, he is caught unawares by Lieutenant Royal Firmin, Jr., who instead pours a bottle of beer into his trousers. Lieutenant Firmin runs the estate at Stanbridge Earls, as assistant to Captain B B Morse. It is his main job to keep the guests happy.

American airman Lieutenant Broadnax then plays a practical joke on his sleeping colleague Lieutenant Michael Zincowich (a Fortress Bombardier from New Hampshire) known as the ‘Hot Foot’ treatment: a lighted match is inserted between the sole and upper of his boot. He then wakes with a start much to the amusement of his colleagues.

The group finish their picnic with a relaxing pint of beer in the sunshine outside the Sir John Barleycorn pub in Cadnam. In the centre, in a white t-shirt, is Lieutenant Royal Firmin, Jr. Also seated outside the pub are two of the American Red Cross hostesses who work at the home, and have joined the men on their picnic. A greyhound dog can just be seen in the background.

The original MoI ‘background story’ caption for this sequence of photographs reads: American pilots, co-pilots, navigators and bombardiers exhausted by long, relentless flights into enemy defences, are sent to “rest” at this English Shangri-La. Lush and mellow, centuries old yet up to the minute in comfort and fittings, the house and grounds have been lend-leased to the US Eighth Army Air Force by Britain’s Air Ministry. The home aims to prevent nervous breakdowns by easing the nervous tension before it becomes unbearable. At first sign of jitters bomber crews are ordered to “rest”, maybe four days, maybe two weeks. “Doc” Kennedy, Louisianan Flight Surgeon in residence, keeps an eye on heroes of Liberator and Fortress down for a few days’ lounging, trout-fishing, picnicking, cycling, tennis and eggs-for-breakfast with friendly American Red Cross hostesses and English staff including Mr Bunting, the butler. Mr Walter Hutchinson, British publisher whose home this was until the government requisitioned it, gladly lives in a couple of caravans in the grounds while lend-lease works in reverse to keep US airmen flying and fighting fit. This large country house is Stanbridge Earls, near Romsey in Hampshire

All Photos are credit: Imperial War Museum for Non-Commercial Use