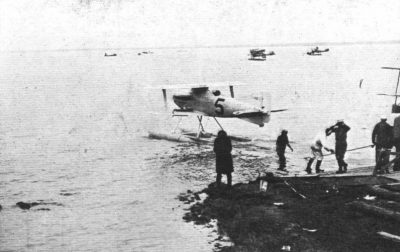 Capt. Broad's Gloster-Napier III leaving the slipway or its first test flight. In the background may be seen the Supermarine-Napier S.4, and, on the right, some of the American seaplanes
Author: NFNPA Archaeology

Film clips from British Pathe show the preparations for Britain’s Schnieder Cup team at Calshot before heading to Chesapeake Bay in America to challenge the hosts after their victory at Cowes in 1923 and then in 1924 by default of no nations challenging them.

In the Americans won again, ahead of the British Gloster Napier III flown by Captain Broad at 199mph and the Italian entry. Two British planes did not compete as both R. J. Mitchell’s Supermarine S.4 and the other Gloster III were damaged before the race.

You can read more about the Schneider Cup competition and the various years in the overview article here: Schneider Trophy Overview

British Pathe also has footage of the actual competition in America that can be viewed on their site: Sport: 1925 Schneider Cup Trophy: Usa Victory 1925