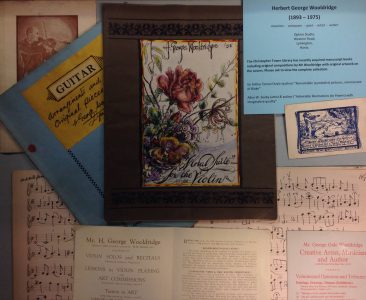 Christopher Tower, who was educated at Eton Christ Church, Oxford, was the author of nine poetry books and travelled extensively in the Middle East. He spent his later years in Athens and the New Forest.

The Library contains one of the largest collections of books, maps, photographs, reports and ephemera on the Forest, available to the public in a single location. It is also home of the Ecademy Project, one half of the team behind New Forest Knowledge.

On Saturday, new acquisitions will be in focus including a sample of the Crosthwaite-Eyre archive and sheet music by the Lymington-based early twentieth century composer, Herbert George Wooldridge.

Staff and volunteers will be on hand to help with enquiries in the Library between 10am and 4pm when members of the public are invited to drop in. There is no need to book.